A nutrient solution for African cocoa 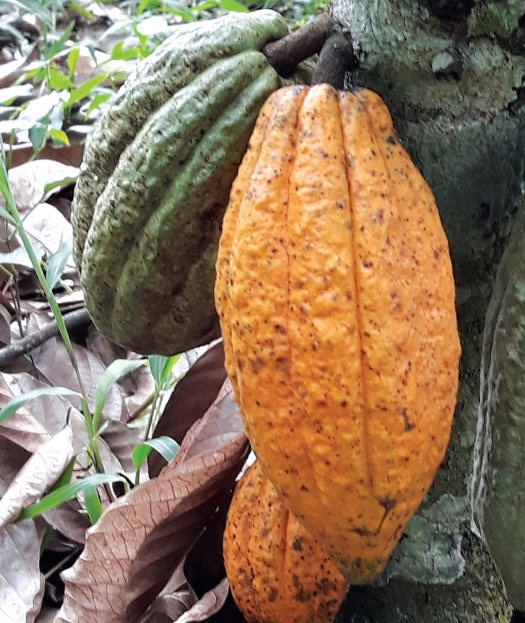 COCOA REQUIRES HIGH rainfall conditions which are conducive to soil saturation and soil nutrient leaching,but despite these clear pressures on soil fertility, the use of soil-applied fertiliser has never featured prominently in cocoa cultivation. Significant amounts of nutrients are removed from the cocoa plantation when the ripe pods packed full of beans are harvested for processing. Risk of spreading Phytophthora pod rot and other pod diseases means the husks cannot be returned to the cocoa estate after the pods have been cracked open and the beans removed for curing (fermentation and drying).

However despite all these factors, which point towards potential nutrient deficits in cocoa, there has always been a certain negativity in the traditional commentary on fertilisation, whether for nursery or field-grown cocoa and for both young and old trees. Suspicions remain that the deep leaf litter which builds up under the closed cocoa canopy, prevents efficient uptake of soil-applied fertiliser by the roots.

Experience gained over the last fifty years strongly suggests foliar feeding, by spraying the foliage with soluble nutrients, is the logical way forward, and by using leaf nutrient analysis, rather than soil analysis as the arbiter. What’s more, the large, oval leaves of the cocoa tree canopy provide an ideal template for interception and deposition of the spray droplets. 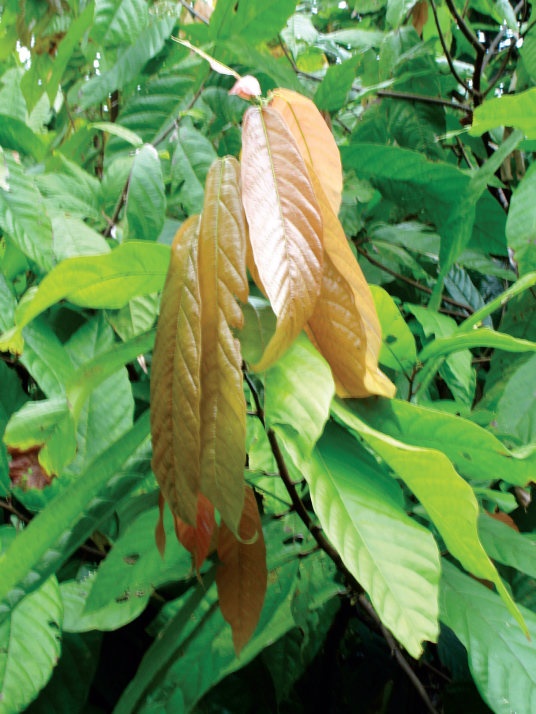 I visited the East of England headquarters of Omex Agrifluids, a UK company which designs and manufactures an in-depth range of soluble liquid and powder nutrients for use, on a huge range of crops, including cocoa, in all four corners of the world. Omex’s expertise and experience extends throughout the cocoa-producing nations of West Africa, South America and South East Asia, the three main hubs of world cocoa production.

I spoke with Dr Ben Odunlami, technical sales manager for Africa, and managing director, Peter Prentis. Prentis’ Far East remit covers a number of South East Asian nations, including Malaysia and Indonesia, which together with West African Nations, such as Nigeria, Ghana, Cameroon and Cote d’Ivoire, forms the largest portion in world cocoa production. I proceeded to ask Odunlami and Prentis for a contemporary perspective on nutrient requirements for fast, sustainable growth of cocoa beans, their resilience to diseases, and maximum yield of high quality cocoa beans.

The cocoa nursery is the logical place to start. The prime purpose of tree nurseries, whether for cocoa, coffee or tea, is rapid root growth, to produce seedlings large enough and sufficiently well-established, to withstand ‘seedling shock’ following transplantation of the seedlings into the field. Factors contributing to ‘seedling shock’ include heat and drought (abiotic factors), and biotic factors, such as insect pests and competing weed growth.  The company’s answer to cocoa seedling nutrition is Omex Bio 20. “Our Omex Bio 20 is a highly concentrated liquid emulsion product, containing Nitrogen (N), Phosphorous (P) and Potassium (K), all at 20% weight/volume (w/v), Magnesium (Mg) at 1.50% and a full range of micronutrients, most of which are in a chelated form,” said Prentis. Omex Bio 20 also has a bio-stimulation function, provided by a seaweed-derived organic addition to the  formulation, which stimulates and sustains root growth and development.

Cocoa is grown throughout the wet and humid tropics but commercial production is concentrated in definite regions within the Equatorial tropics. West Africa’s quartet of top cocoa-producing nations (Cote d’Ivoire, Ghana, Nigeria and Cameroon), are four of the major cocoa producers in the world. West Africa is the largest cocoa producing hub in the world.

Odunlami, whose remit covers cocoa in West Africa told us, “We do considerable business throughout West Africa in Francophone countries like Cote d’Ivoire, as well as English speaking nations such as Ghana and Nigeria.” Such is the individual importance of cocoa to this region and to us as a company that we have designed and developed two specialist products dedicated to cocoa in West Africa. They are: CocoBoost is a highly concentrated water soluble suspension product for cocoa in Ghana, Nigeria and other English speaking countries. CocoBoost is a foliar-applied product containing N, P and K at concentrations of respectively, 8.30%, 32.40% and 21.10% w/v; chelated Mg and a full complement of micronutrients Iron (Fe), Manganese (Mn), Zinc (Zn), Boron (B), Cobalt (Co) and Molybdenum (Mo), with most of these in chelated form.

Omex have used the same ‘broad-brush’ approach for Francophone West Africa by designing a foliar-applied soluble product possessing all nutrients required by cocoa. ‘Folicao’ (Engrais Foliaire pour Cacaoyers – Foliar Fertiliser for cocoa) is a water soluble suspension product containing N, P and K at 13.5%, 27.00% and 27.00%, Mg and the same micronutrients (most chelated), as contained in Omex Cocoboost. 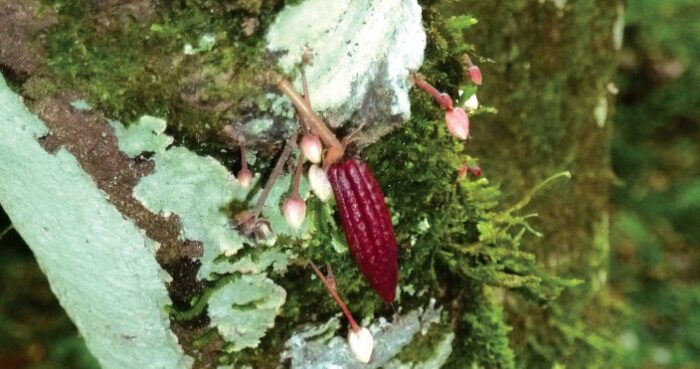 Flowering in cocoa is an example of cauliﬂory whereby ﬂowers, and subsequently the pods (fertilised ﬂowers or fruits), are borne in cushions on the bark of the trunk and scaffold branches. Image Credit: Dr Terry Mabbett

“This pair of completely soluble nutrient products is applied by foliar spraying on to the leaf canopy for subsequent rapid absorption of the nutrients by the leaves, although they may also be absorbed by the roots. This means any spray liquid which runs off of the leaves and onto the soil can be intercepted and absorbed by the roots,” said Dr Odunlami. “Both products are designed to provide cocoa with a full complement of nutrients and right through to pod harvest,” said Prentis. “Calcium (Ca) is  important for structural support as the tree begins to branch, and additionally for good pod growth and development,” says Ben Odunlami.  Significance of calcium in this respect is two-fold, through the provision of high cocoa bean yields and as a structural component of cell walls to maximise resilience of pods to infection and disease development.

K, N and Ca accumulate at high levels in cocoa to become effectively immobilised, and are only available to the cocoa crop again via recycling of the leaf litter. Accumulation and effective immobilisation of calcium in six-year-old cocoa trees has been calculated at 300 kg/ha. A significant amount of calcium is lost at harvest. Malaysian research showed it was 4.9 kg/ha/year on a yield of one tonne of dry beans/ha. “This is why we recommend Omex CalMax (22.5% w/v calcium plus magnesium and a balanced range of micronutrients) as a standard, frequently-applied foliar spray to cocoa throughout Asia,” said Prentis.

Specific nutrient deficiencies in cocoa are well documented, with shortfalls in zinc (Zn) and boron (B) being the most common. Zinc deficiency may be associated with low soil zinc, but just as often is caused by high pH and poor soil aeration, which combine to ‘lock up’ soilbased zinc, and reduce its uptake by the roots. I asked Odunlami and Prentis if Omex has anything specific for correcting zinc and boron deficiency in cocoa. “We do have a product that was originally designed for coffee but which may prove entirely appropriate for simultaneously correcting zinc and boron deficiencies, which frequently occur in cocoa,” said Ben Odunlami. The product is called ‘Zibo’, a ‘two in one’ formulation based on boron and zinc, and initially designed for use on coffee in Africa. “Zibo is applied as a foliar spray to mature coffee trees, but may well prove equally useful for cocoa,” said Peter Prentis.

Phytophthora (pod rot and stem canker) is the single  most damaging disease of cocoa worldwide, and as such, the single largest limiting factor on cocoa production. Furnishing fertiliser at optimum rates, and timing are important in maintaining general health, and resilience of cocoa to infection and disease development. But is there a more specific and targeted way to deal with Phytophthora, while staying within the boundaries of plant nutrition? The answer is yes, by utilising the biostimulation properties of phosphite (PO3-), the salt of phosphorous acid (H2PO3). Phosphite is a reduced form of phosphate (PO4-) the salt of phosphoric acid (H3PO4). Phosphite ions have the ability to suppress diseases, not directly like a fungicide or a bactericide, but indirectly by eliciting an anti-pathogen response in the host plant, when applied as a foliar spray. 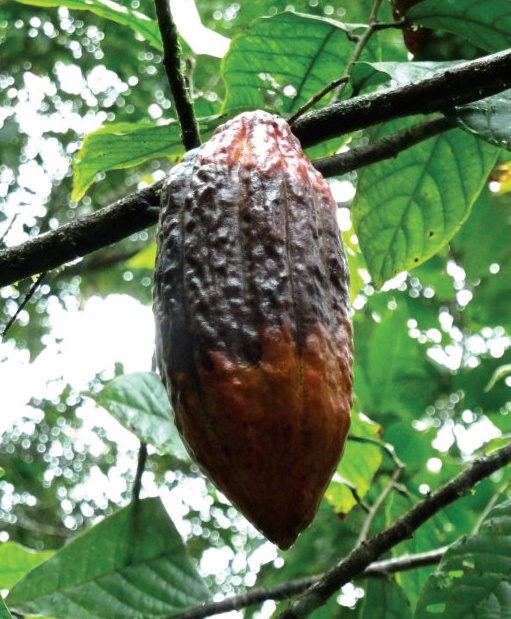 Phytophthora pod rot is an ever present threat wherever cocoa is grown in West Africa. Image Credit: Dr Terry Mabbett

Unique properties of phosphite make it well suited to this role, and especially in cocoa. Exceptionally high solubility of phosphite offers distinct advantages in the formulation of a soluble liquid product, for rapid entry into leaves and movement within the plant. Furthermore, phosphite is mobilised and transported in the xylem tissue (upwards into the leaf canopy) and also in the phloem tissue (downwards to the roots). Phosphate moves only in the xylem tissue. Two-way transport of phosphite is especially important in cocoa,because the leaves form a distinct canopy at the top of the tree, while pods are attached to the trunk and main scaffold branches, mostly in the lower part of the tree. This pattern of pod distribution arises from a ‘condition’ called cauliflory, where flowers are bornein ‘flower cushions’ on the bark of the trunk, and scaffold branches. I asked Prentis and Odunlami whether Omex is ‘exploiting’ this dimension in cocoa crop nutrition. “We most certainly are, by using Omex DP98 based on potassium phosphite and used as a foliar spray,” said Prentis. Phosphite is transported downwards in phloem to suppress Phytophthora pod rot, and stem canker, as well as stimulating root growth and development,” said Odunlami.

Peter explained how DP98 is used in an even more highly targeted way, by painting on Phytophthora stem canker lesions to provide an alternative route of entry for phosphite into the tree, while bolstering tree resilience to the disease. “CocoBoost contains phosphorous as phosphite, to offer West African cocoa farmers a dual crop nutrition and disease management dimension,” said Dr Odunlami. More cocoa is lost to Phytophthora in West Africa than anywhere else in the world and largely due to the prevailing climate and weather, with cocoa-growing areas of countries, such as Nigeria experiencing ferociously wet seasons, during which these Phytophthora pathogens thrive.  Early mycologists called Phytophthoras ‘the water fungi’, due to a total reliance on water for pod infection, disease development and spore production, liberation and dispersal; a reliance which extends to water in the liquid phase, as free water on the plant surface, and water in the vapour phase, expressed as relative humidity of the air. The Phytophthoras are no longer regarded as true fungi. They are now described as ‘fungus-like pathogens’ and are classified in the same group as algae and water moulds.