A soluble solution for the development of sugarcane setts 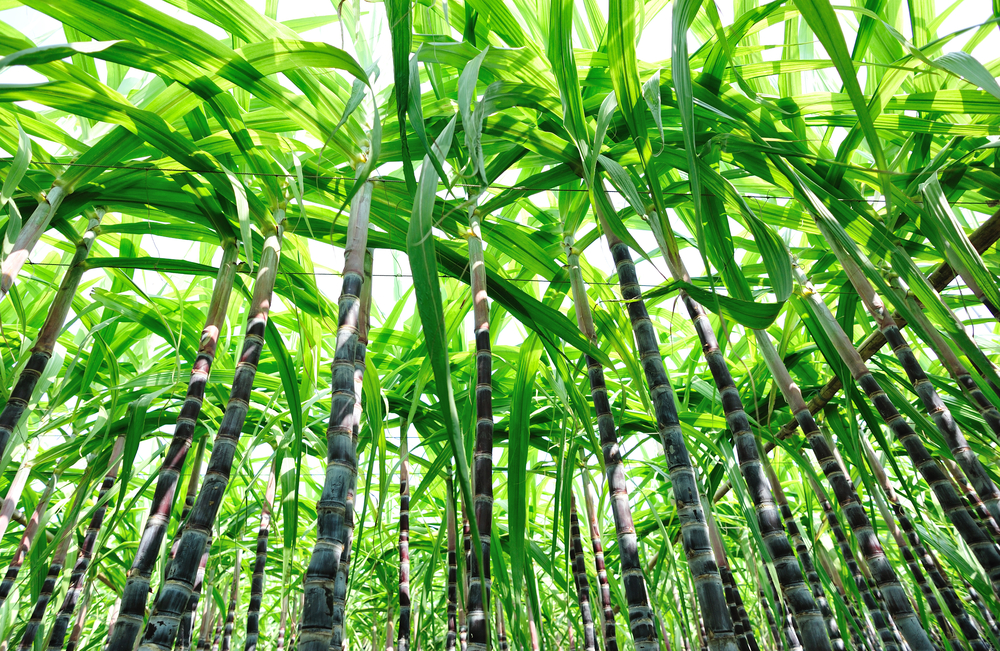 Dr Terry Mabbett speaks about the role of nutrients for the root growth and development of sugarcane setts.

SUGARCANE IS TRADITIONALLY grown by vegetative propagation. Lengths of stalk or cane (about 300 mm) and commonly called setts are used as stem cuttings. Each  sugarcane sett bears a number of buds that will grow and develop into shoots and new stalks (canes). Between 10-24 months of growth, development and maturation will be needed before the canes are ripe and ready to harvest for the high sucrose content.

Sugarcane is a conundrum. Once established, there is no stopping this fast-growing member of the grass family (Graminae). Like most grasses, sugarcane tillers to cover the ground and smother all weeds in its wake. However, the initial growth phase involving germination of sugarcane setts and growth of buds into shoots is a very slow and drawn out process, during which newly-planted sugarcane setts are highly susceptible to competition from all manner of weeds. Early growth sugarcane can be out-competed by the full range of tropical weeds including true grasses such as Brachiaria reptans (signal grass), sedges like ‘nut grass’ (Cyperus rotundus) and the classic broad-leaf, dicotyledonous weed including Amaranthus spinosus (spiny amaranth) and Euphorbia hirta (asthma plant). 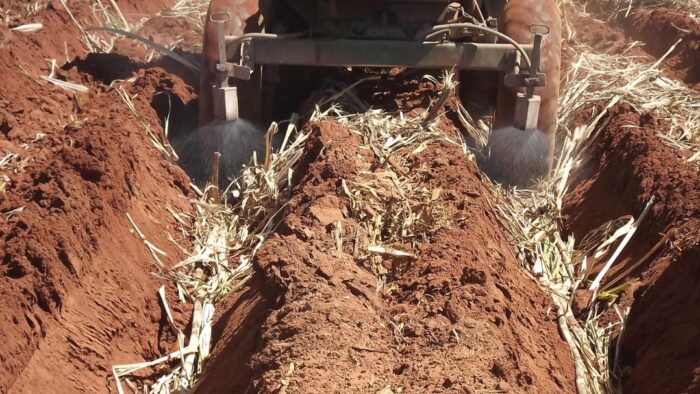 Spray treatment of sugar cane setts in the furrow with soluble nutrients and biostimulants.

A kick-start for sugarcane

First-formed roots are of the sett itself and are characteristically thin, branched, superficial and transitory. These initial roots are followed by longer, straighter and more permanent stem (adventitious) roots. Main function of the stem roots is extraction of water and nutrients from the soil, but also provision of physical support through plant anchorage. Last but not the least are buttress roots that penetrate deep into the soil profile to anchor increasingly big and bulky sugarcane plants into the ground. By this stage, sugarcane has already achieved a significant height and density and as such is difficult to work in for fertiliser application.

Soil nutrient provision is clearly not enough during the long and drawn out germination and early growth stages. Priming with soluble products which combine nutrients with biostimulants to boost growth is required. Spray application of soluble nutrients and biostmulants to sugarcane setts planted in the furrow offers farmers an ideal opportunity to prime the plants and speed up sett germination and growth to get new shoots out of the ground as soon as possible.

Omex Agrifluids designs, develops and sells high quality soluble nutrient products to farmers and growers throughout the world for use on the widest range of crops including sugarcane. Omex has long recognised the requirement for an early boost for germination, prompt and rapid growth and early plant establishment.

Omex’s plant priming practice for sugarcane targets setts in the furrow with soluble nutrients and biostimulants to achieve earlier crop establishment and enhanced tillering and translating into more and bigger sugarcanes to cut at harvest time. In cooperation with distributors and farmers, Omex has monitored the early growth and establishment of sugarcane crops to show shoots coming out of the ground earlier and faster and looking stronger for at least two to three months after in-furrow priming. Growth is shown to be quicker and with plants more securely established in a shorter space of time.

There is another good reason for priming cane setts but frequently overlooked due to a general but misinformed view that sugarcane crops, because of their overall fast growth rate, high foliar density and size are not troubled by weeds. This may be true once the sugarcane tillers have covered the ground but certainly not so in the early stages of crop growth and development.

Weed control is most needed immediately after planting the setts because they will have to grow for a considerable time before reaching the stubble stage and to cover the soil. Indeed during this early growth stage weeds grow much faster than sugarcane and with more time and opportunity to establish because they will have started to germinate and grow soon after the last harrowing or furrowing.

Sugarcane will eventually cover the ground and form a canopy which effectively shades out weeds, but this will take four to five months for planted cane and three months for ratoon cane in a moist warm climate. Thus anything which gives sugarcane a kick start and a boost to growth in the early stages can only help to mitigate weed competition.

A boost from Omex Bio 20

So what exactly are the nutrients, biostimulants and commercial products which underpin the Omex best practice for early stage growth and establishment in sugarcane? To discover more, I travelled to company headquarters at Kings Lynn in the County of Norfolk in the east of England to speak with Peter Prentis managing director at Omex Agrifluids. “First on the sugarcane scene is our Omex Bio 20” said Peter Prentis, “applied as a spray to cane setts in the furrow. Omex Bio 20 is tried and tested product bringing together a comprehensive range of essential macronutrients and micronutrients, the action of which is boosted by inclusion of an organic material from a single variety of seaweed. The biostimulant property of the seaweed extract kick-starts growth of the sugarcane sett,” he said. “This makes Omex Bio 20 much more than a balanced formulation of essential plant growth nutrients because the biostimulant does just what the name implies. It stimulates root growth and development thereby enhancing and increasing root biomass to maximise the access, absorption and utilisation of soil moisture and nutrients by the germinating sugarcane sett. Overall result is faster plant establishment and more rapid and resilient growth,” added Prentis.

Next on the Omex list for the treatment of setts in the furrow are two of the company’s single micronutrient products. Omex ‘Kingfol Zinc’ and Omex ‘Kingfol Manganese’ provide zinc and manganese which are known to underpin the growth, development, yield and quality of sugarcane.

Omex Kingfol Zinc contains 70% w/v (weight/volume) zinc. “Zinc is the most widely found soil-based micronutrient but also the most inaccessible to crop plants because huge amounts are locked up as insoluble zinc and therefore unavailable to plant roots,” said Peter Prentis. Shortfalls in naturally occurring plant-available zinc make deficiency of this essential micronutrient the most acute and widespread across the world’s major field crops and sugarcane is no exception,” he said.

Zinc boosts root activity and has a crucial role in early crop growth. A shortfall of zinc is reflected in a range of deficiency symptoms most prominent of which are reductions in tiller formation, shortening of the internodes and plants with thinner stalks showing a loss in turgidity. At leaf level zinc deficiency shows up as a conspicuous chlorosis (yellowing) of the veins and especially in young leaves. Areas of the lamina alongside the midrib and at the leaf margins stay green while the remainder is chlorotic. Leaves are generally fewer in number and shorter in length with a high frequency of tip death. The increasing development of red-coloured areas or lesions is caused by an accumulation of anthocyanin pigments. At the cell level zinc is a crucial co-factor for a number of enzyme systems.

Omex ‘Kingfol Manganese’ contains 52.8% w/v manganese. Like zinc, manganese is a significant factor in the activation of enzymes. A shortfall in manganese will quickly show up as a range of classic deficiency symptoms including chlorosis (yellowing) of the leaf lamina tissue between the veins from the leaf tip and towards the
centre of young leaves. In instances of acute manganese deficiency the already chlorotic tissue may die, turn brown and split along the lines of necrosis with marked leaf twisting. Mature leaves may also succumb and show these deficiency symptoms but accompanied by reddish-coloured necrosis caused by accumulation of anthocyanin pigment. Inter-veinal leaf necrosis (manganese) rather than necrosis of the veins (zinc) is what distinguishes manganese deficiency from zinc deficiency in sugarcane.

Despite being essential to the health and quality of sugarcane, boron is frequently the most deficient nutrient in sugarcane plantations. This micronutrient’s crucial role in a range of physiological and biochemical processes is well established, although boron is still the least well-understood of the micronutrients. Peter Prentis told Far Eastern Agriculture how sugarcane growers in Brazil, the world’s biggest producer of sugarcane, use Omex Foliar Boron (11% boron and 4% nitrogen w/v) as a foliar spray.

New shoots push out through the soil sooner and look stronger when sugarcane setts are treated in the furrow. They start to photosynthesise more promptly and at a faster rate, thus contributing to individual plant growth, establishment and development occurring that much sooner in the crop cycle. Compared with untreated setts in the same field the earlier appearing shoots continue to look stronger and more robust for a 2-3 month period, after which the advantage appears to fade as a more even stand is presented.

Sugarcane remains vulnerable to competition from weeds throughout the early growth and establishment stages.

However, ‘proof of the pudding comes in the eating’ or in this case harvesting of treated and untreated plants. Those treated with Omex Bio 20, Omex Kingfol Zinc and Omex Kingfol Manganese yield a higher tonnage due to bigger and heavier canes and, more crucially, having a higher sugarcontent.

Treatment of setts in the furrow with products containing key, single, soluble nutrients like zinc (Omex Kingfol Zinc) and manganese (Omex Kingfol Manganese) and others combining a broad range of nutrients in tandem with biostimulants products (Omex Bio 20) is becoming standard practice in the top sugarcane growing countries of the world. Omex sugarcane ‘priming’ products are already used in India, Thailand, Indonesia which together with China, Pakistan and Philippines rank among the top 10 sugarcane producers in the world.

Farmers and growers will clearly baulk at the prospect of trying to spray well-grown sugarcane for the simple reason that they will be unable to move with any ease and efficiency through the crop with either tractor drawn/mounted sprayers or manually-operated sprayers. The only other option for spraying sugarcane at this advanced stage of growth and development is by aerial spraying.

Peter Prentis sums up the situation for sugarcane as follows. “Applying nutrients and biostimulants at the very beginning of the crop is by far the easiest option for sugarcane farmers and growers. It allows them to avoid the logistical constraints in relation to driving vehicles through or walking through well grown sugarcane with all the associated problems of achieving adequate spray coverage. However, the single biggest advantage of treating cane setts in the furrow is providing ‘fledging’ sugar plants with the right nutrient requirements and at the right time, which is the rooting and establishment stage of the crop.