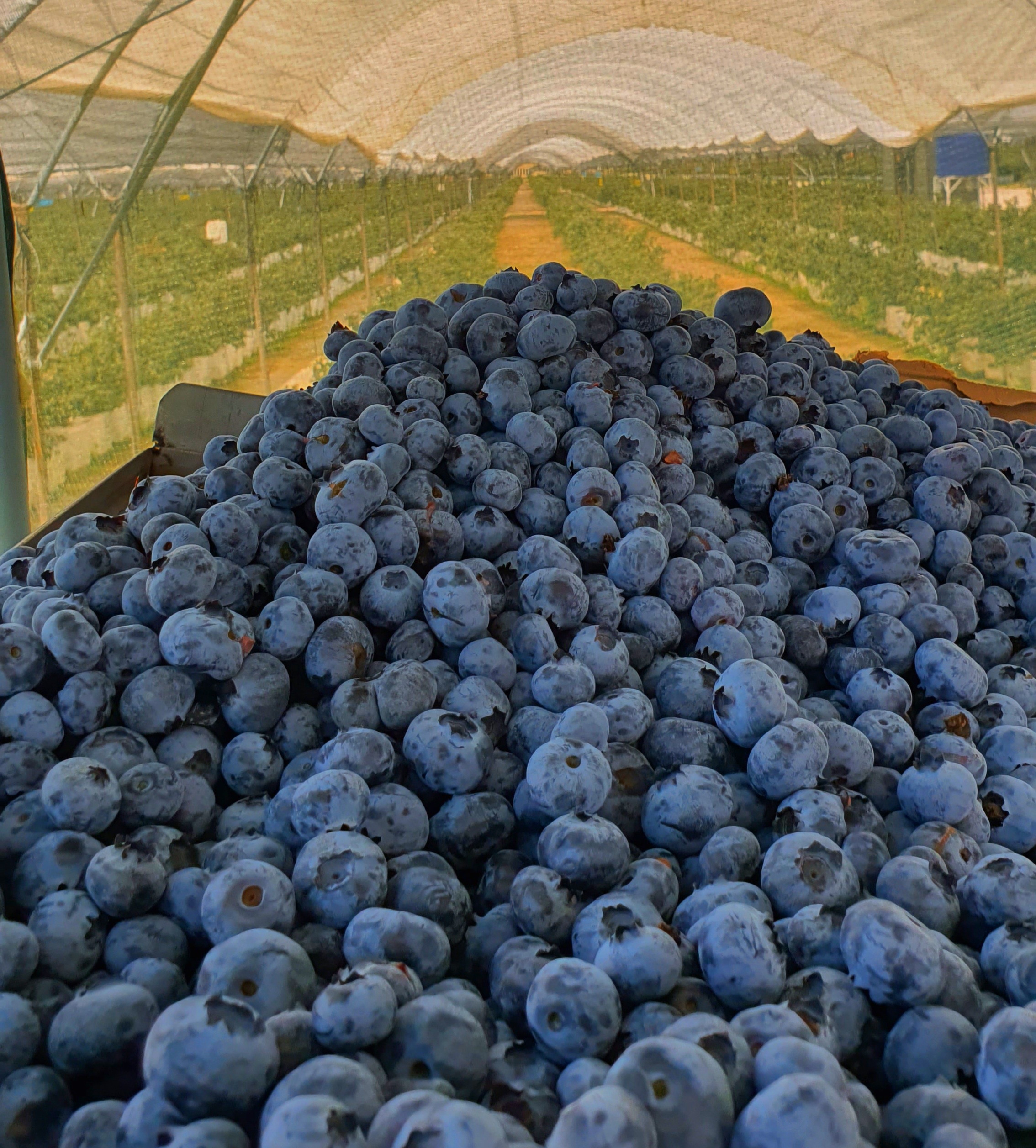 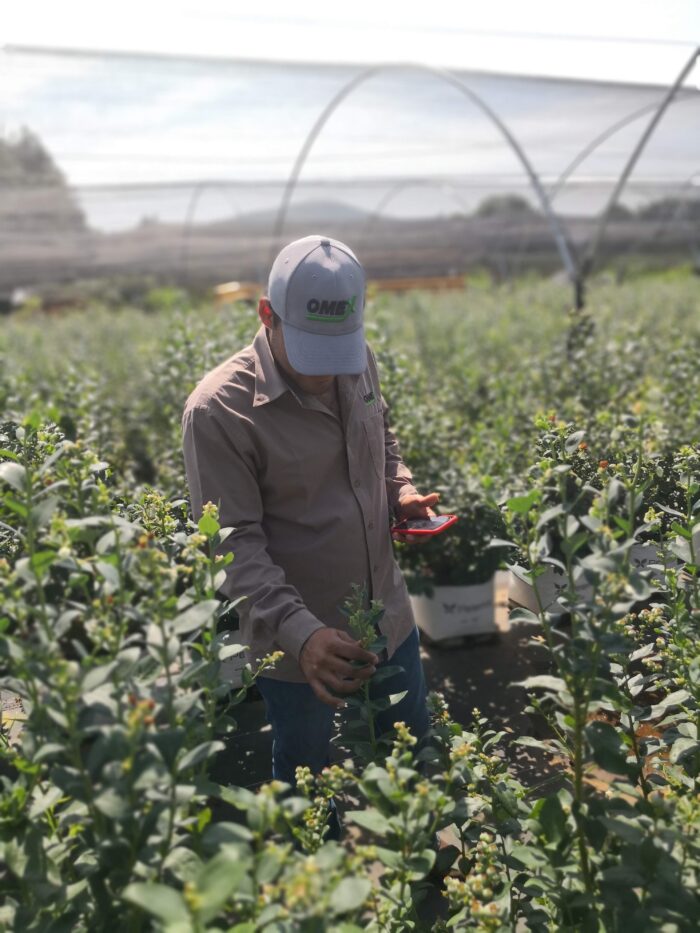 Blueberry cultivation and production without using chemical fungicide is now a reality.

Cultivated blueberry is very much a 20th-century phenomenon. Before the early 1900’s the only way to enjoy the North American native bush fruit was to gather them in the wild. The roots of blueberry cultivation are firmly embedded in the State of New Jersey (United States), and were ‘put down’ by combined skills and cooperation between farmer Elizabeth White Coleman and botanist Dr Frederick Colville, and based on his pioneering research work entitled ‘Experiments in Blueberry Culture’. The first cultivated crop of blueberries was produced in 1916. 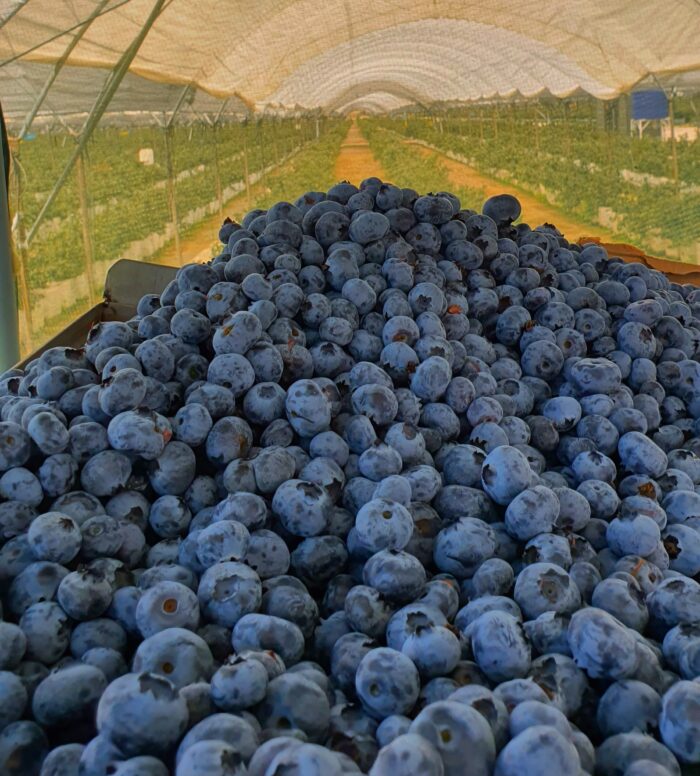 Recent years have seen blueberry take on the mantle of the world’s ‘super-fruit’ primarily due to the exceptionally high antioxidant content but more generally because they are rich in a range of mineral nutrients and vitamins as well as being a good source of fibre. Maintenance of this status in commercial fruit clearly comes with a strict requirement for dedicated plant and crop nutrition. This means the provision to plants of all essential nutrients including the macronutrients (nitrogen, phosphorous and potassium); micronutrients including manganese, copper and zinc; and the so-called me-so-nutrients like calcium and magnesium.

Raw blueberries are exceptionally rich in manganese while containing generous amounts of phosphorous, magnesium and calcium. However, some of these nutrients and especially calcium and phosphorous may have other important functions including roles in fruit quality and boosting the resilience of crop plants to disease. Calcium is the most important and intriguing in this respect.

Blueberries have only been under intense cultivation for a relatively short period of time but this has not stopped a range of plant diseases evolving with the crop to cause potentially- serious economic levels of damage and crop loss.
The most widespread and serious is root rot caused by a fungus-like Phytophthora pathogen called Phytophthora cinnamomi. Like other root infecting pathogens, this one resides on debris in the soil and as such is a pernicious problem for perennial bush crops like blue-berry which by their very nature will spend many years growing and yielding in the same soil. 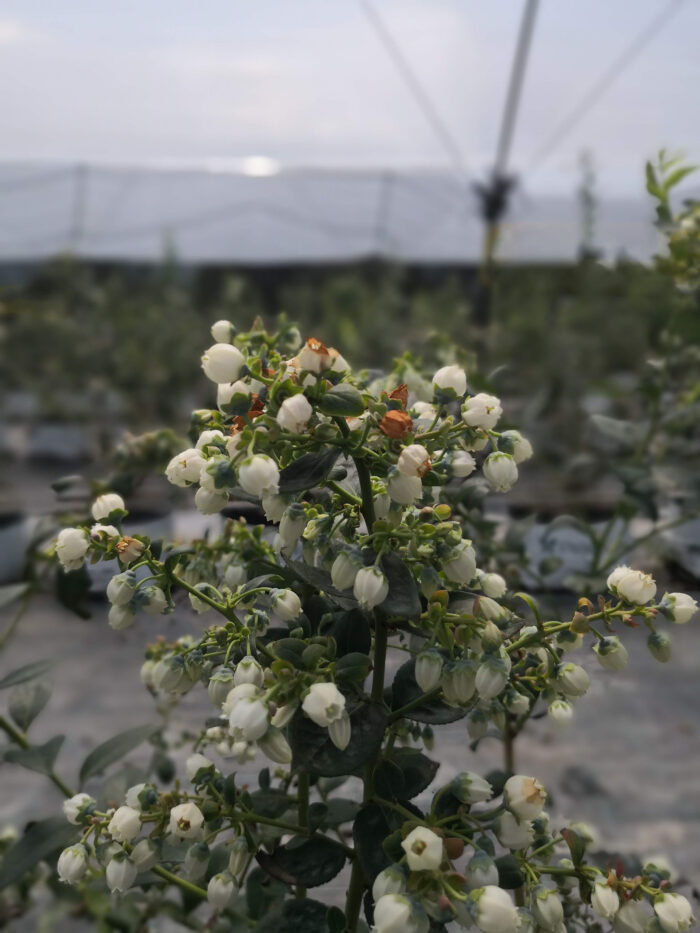 In common with other Phytophthora pathogens, which target the root systems of plants, Phytophthora cinnamomi is essentially terminal because the infected blueberry bush root system is increasingly unable to absorb water and nutrients to support the above-ground plant parts. Foliar symptoms including wilting with yellowing and reddening of the leaves are among the earliest indications that something is amiss below ground. Indeed these are the sort of physiological responses expected when a plant fails to access sufficient water and a full complement of essential nutrients due to a malfunctioning root system.

Phytophthora cinnamomi shows multi-host disease activity with the pathogen able to infect and cause disease in a massive range of plant species including other fruit crops like avocado and pineapple. It also has a propensity for high disease activity within a wide range of climate. Phytophthora cinnamomi is tropical in origin and native to the Indian sub-continent where it was first identified centuries ago on cinnamon trees (hence the name), but now found world-wide infecting hundreds of different species including chestnuts (Castanea) in cool temperate climates like North America and Europe. High disease activity on blueberry which is essentially a cool temperate species is, therefore, no problem at all for Phytophthora cinnamomi. 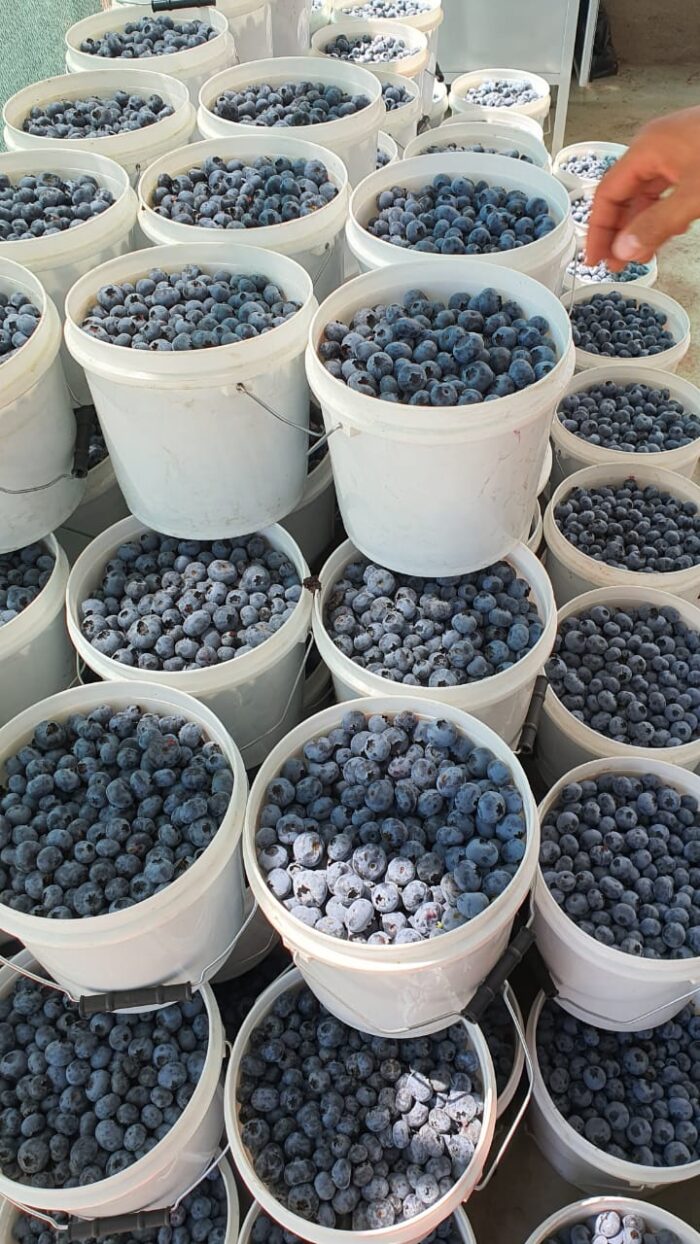 Root rot of blueberries has traditionally been managed by using systemic, site-specific chemical fungicides but such options are decreasing as established products lose their approval and are removed from the market. They do work and invariably well but at an environmental cost as well as a financial cost. What’s more, attempts to control Phytophthora cinnamomi with such site-specific action fungicides invariably proves unsustainable in the longer term. The very nature of their highly specific action on the microbial pathogen populations means strains of the microbe resistant to their action eventually appear.

Consumers increasingly demand organically produced fruit and vegetables requiring zero use of chemical fungicide. What’s the point in producing and eating blueberries for health-giving reasons if they have previously been treated with chemical fungicide is the clear thinking behind this trend.

Blueberry cultivation and production using zero fungicide options are now a reality because alternative disease avoidance and management options are available to growers. Research shows that the manipulation of blueberry crop nutrition can manage diseases like root rot caused by Phytophthora cinnamomi with particular nutrients playing specific roles in strengthening plant tissues to boost yield and berry quality. By definition all plant nutrients are essential for proper plant growth and development but one, in particular, stands out from the rest in blueberry cultivation and that nutrient is calcium.

Key to calcium as a bulwark for crop plants against adverse environmental conditions, whether abiotic (e.g. low temperature and drought) or biotic (pests and diseases), is this nutrient’s fundamental strengthening role in the growth and development. Calcium is first and foremost a tissue strengthening element and justifiably described as ‘the plant resilience nutrient’. The secret to the strengthening role of calcium is in calcium pectate a gelatinous compound constituting the middle lamella which binds cellulose cell walls together in plant tissue. 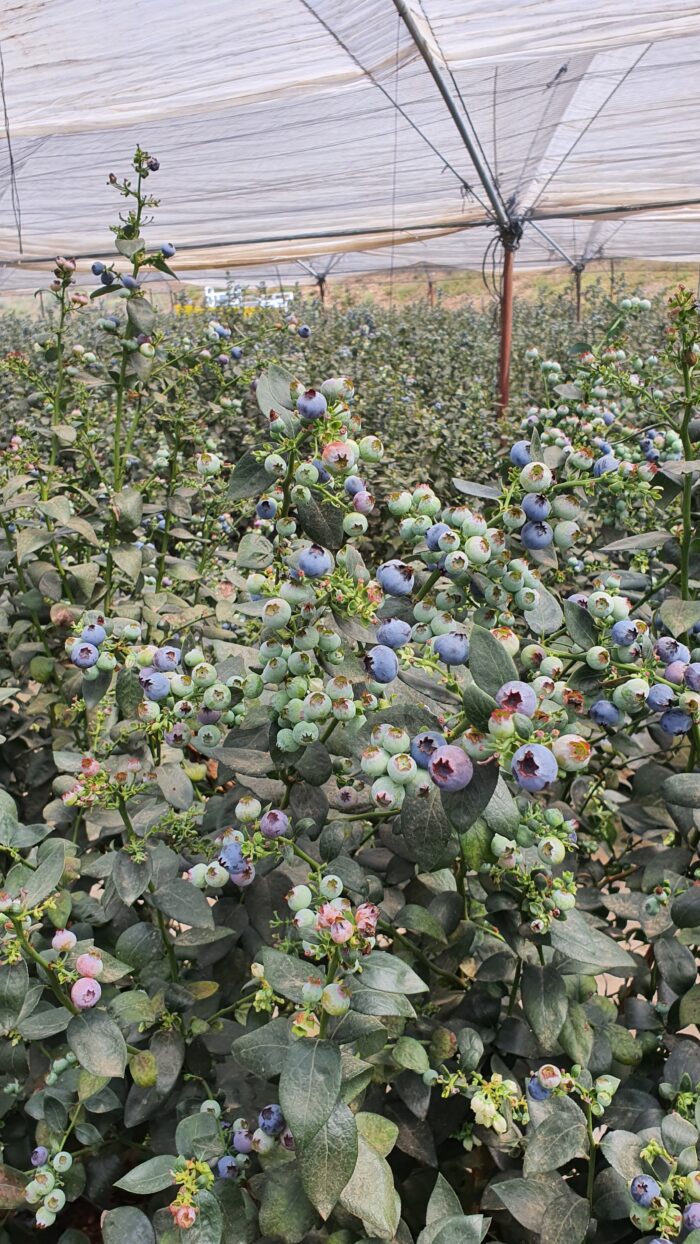 Soil calcium has been shown to disrupt the root infection process of northern highbush blueberries in the United States, but relying on soil calcium is not a fail-safe option. The soil may well record a high level of calcium but the proportion present as soluble calcium, and as such available to the roots, may be a different matter. A high proportion of soil calcium is invariably locked up as insoluble salts such as calcium phosphate especially when soils are alkaline with a correspondingly high pH. What’s more the divalent calcium ion (Ca2+) is poorly mobile and shows a slow and tortuous passage from the soil solution and into the roots and from the roots up into the stems, leaves and fruit. Supplement-ing the soil with calcium is not the best option because most calcium-rich base fertilizers like lime (ground limestone) will excessively raise soil pH to the dis-like and detriment of ‘acid loving’ blueberries.

Application of soluble calcium by foliar feeding and rapid uptake of the nutrient by the leaves is secret to the success in providing sufficient of this otherwise poorly mobile nutrient to blueberry bush crops. To find out more about calcium and its key role in blueberry production I spoke with Peter Prentis managing director of OMEX Agrifluids in the United Kingdom. OMEX is a R&D based company that develops and sells soluble nutrient products as liquid and powder delivery systems for the widest range of agricultural and horticultural crops worldwide.

I asked Peter about the benefits of calcium for berry-fruit in general and specifically blueberry. “The calcium complement in a combined foliar application of OMEX Calmax Gold (applied around flowering) and OMEX Calmax (applied post fruit set) will correct any calcium deficiency,” said Peter, adding how this programme of treatment will improve fruit set, enhance yield and assist in maximising fruit firmness, storability, fruit colour and finish.

I then asked Peter whether there was any evidence from OMEX research to support these claims. “We have evaluated the OMEX Calmax range of products on blueberry in Chile one of the fastest-growing producers of this berry fruit and a world-leading exporter of blueberries,” said Peter Prentis. Chilean exports of blueberries for 2019-2020 are confidently expected to weigh in at 115,000 tonnes. 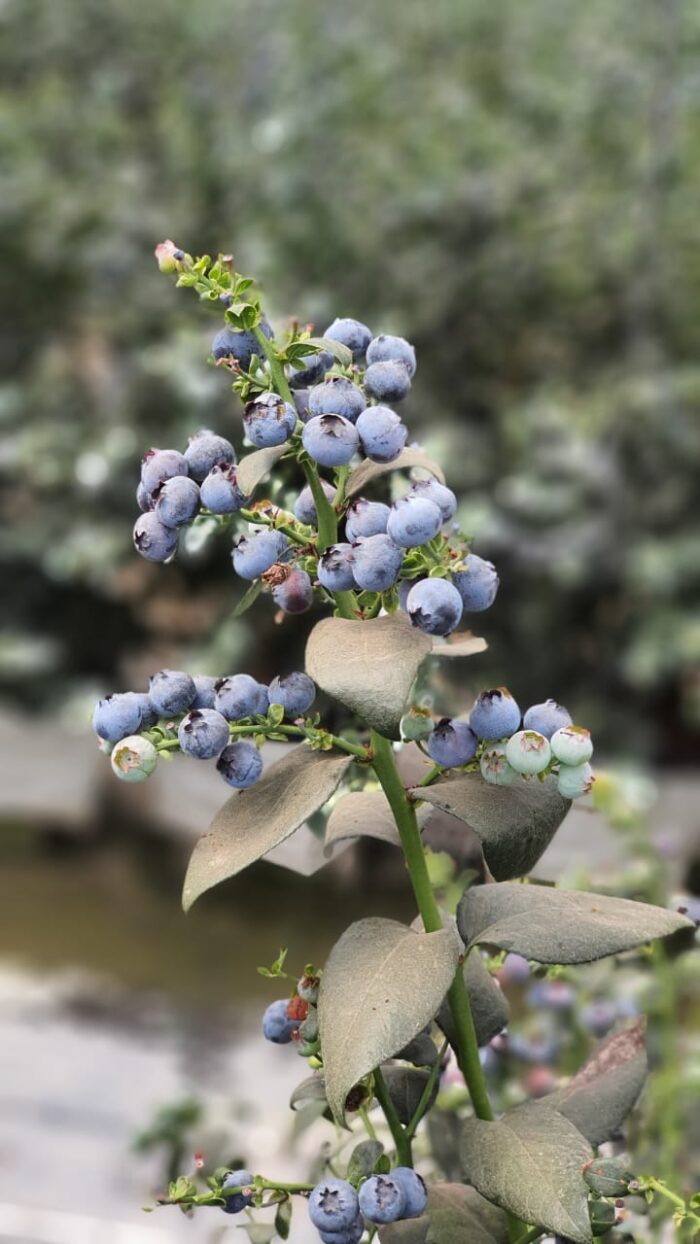 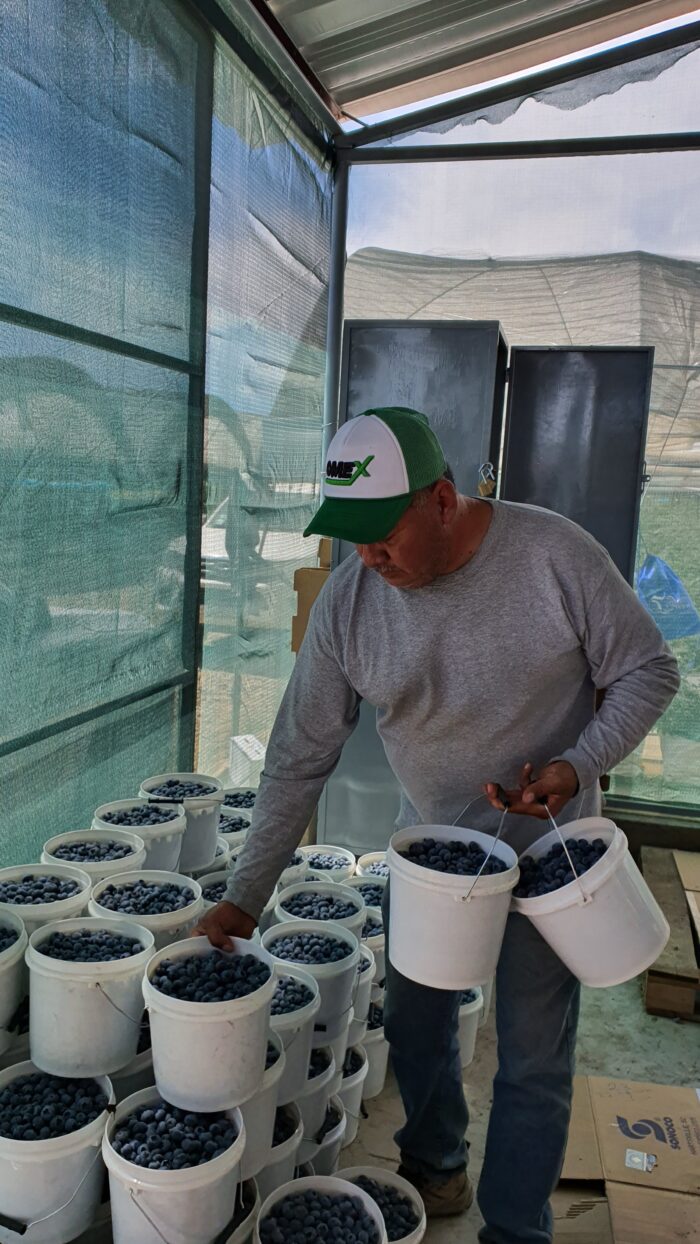 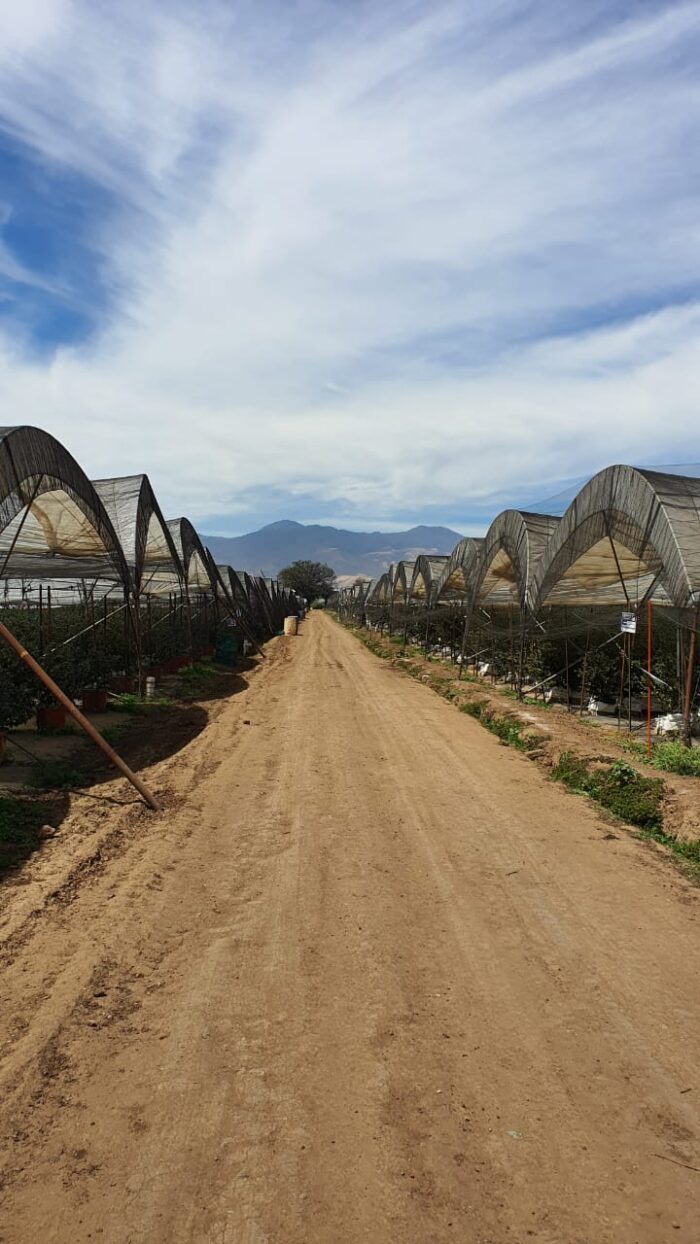 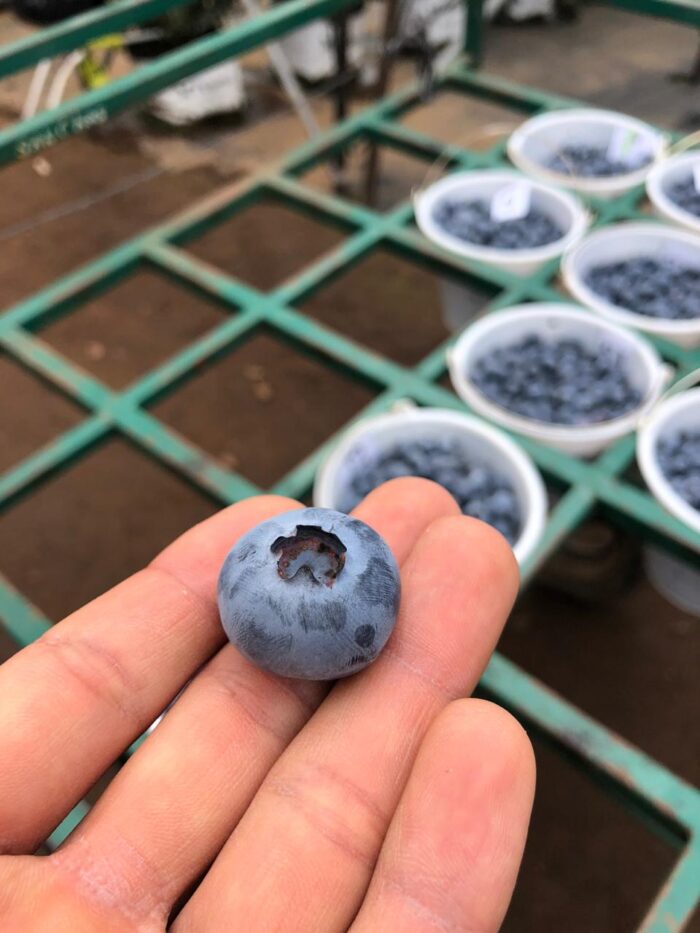 Blueberry is a ‘super-fruit’ with high demand from consumers worldwide

Peter showed me detailed results from field trials to evaluate OMEX Calmax Gold for yield and quality of blueberry fruit, and which clearly showed the benefits of foliar feeding with this high-calcium soluble liquid formulation product. Three applications of OMEX Calmax Gold (300 ml product in 100 litres water) were applied to the blueberry variety ‘Brigitta’ (Vaccinium corymbosum – high-bush blueberry), first at the beginning of blossoming, second at 50 percent bloom and the third at full bloom.

Compared with the no treatment control, OMEX Calmax Gold showed the following benefits:
Significantly increased the number of fruits borne on each spur which translated into a significant increase in yield.

I came away from the company’s Kings Lynn headquarters in Eastern England have learned of super-charged soluble calcium products fit for the world’s number one super-fruit. 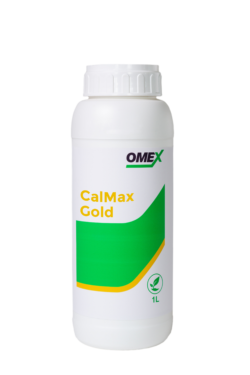 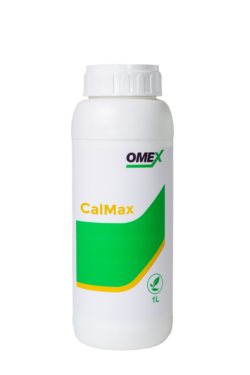