Nutmeg and mace under threat 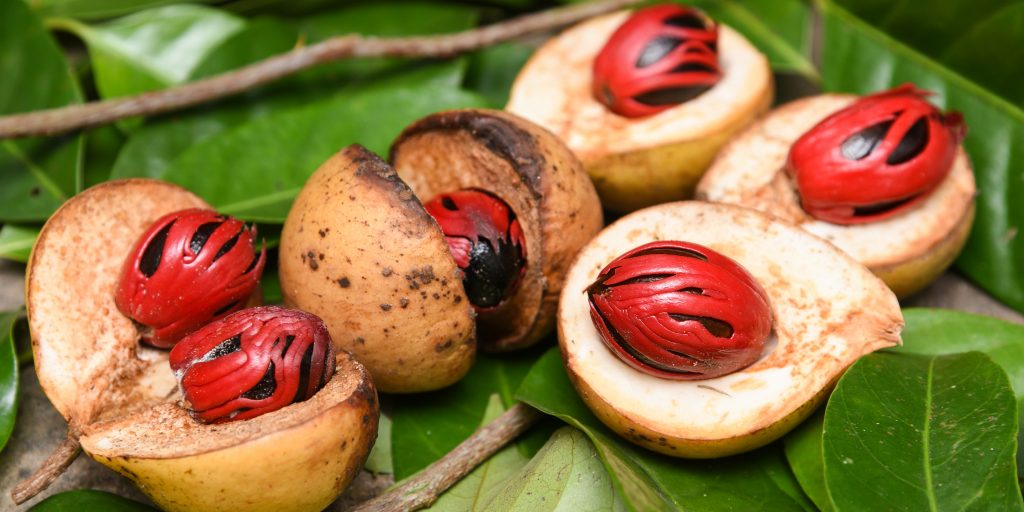 World supplies of nutmeg and mace, two ‘rich and ‘rare’ spices from the east, could be under threat from a mysterious disease and decline affecting the Myristica fragrans tree from which nutmeg powder (from the seed) and mace (from the red seed covering) are sourced.

Nutmeg fruit and seed is rich in a range of mineral nutrients including potassium (K), calcium (Ca), iron (Fe), zinc (Zn), magnesium (Mg), manganese (Mn) and copper (Cu).  Centre of origin is South East Asia and specifically the islands of modern-day Indonesia. Around 500 years ago, nutmeg production spread to other areas of the world including Malabar (Kerala) in India, the West Indian Islands (notably Grenada) and the East African island of Zanzibar (now part of Tanzania). However, at least 50 per cent of world production is still in Indonesia, concentrated in Aceh Province in the north-west corner of Sumatra from where reports of the ‘mysterious’ disease are coming.

In common with other diseases of trees in the hot and humid tropics ‘springy’ disease which affects the bark has been difficult to diagnose and pinpoint to a particular pathogen. However, in many instances the fungus-like pathogen Phytophthora found worldwide as scores of different species are often involved in some way.

Diseases which affect the bark have always proved difficult to control using classic fungicide-based control methods and increasingly so with continuing restrictions on the use of chemical pesticides. However, it is becoming increasingly apparent that nutrients may have a part to play in disease management with custom-formulated plant and crop nutrition perhaps the best way forward. Well-based, structured and balanced crop nutrition increases plant resilience to disease, while specific nutrients are known to trigger anti-microbial (both fungal and bacterial) responses by the plant’s

Not a lot is known or documented about nutmeg tree nutrition although the rich nutrient content of the harvested fruit and seed is well established. Nutmeg fruit and seed are rich in a range of mineral nutrients including potassium (K), calcium (Ca), iron (Fe), zinc (Zn), magnesium (Mg), manganese (Mn) and copper (Cu). Indeed, a veritable mineral ‘cocktail’ which underpins the potential value of these ‘rare’ spice commodities used in human food, pharmaceuticals and medicine.

So perhaps the best way forward is to ‘work backwards’ from the fruit and seed as a rich source of nutrients and thereby assess the likely nutrient demands and requirements of growing nutmeg trees. And how this knowledge may be used to bolster the resilience of trees to disease including the ‘mysterious’ decline currently threatening nutmeg in its natural home on the islands Indonesia.

OMEX Agrifluids is showing a considerable interest in nutmeg with expertise and experience in tropical tree crop nutrition and specifically for tropical Asia.

Managing Director Peter Prentis with responsibility for product development and marketing throughout Asia said, “Little is known about the factors behind this current condition in nutmeg trees. However, such diseases or declines affecting the bark will invariably prove terminal because the bark necrosis will extend around the circumference of the bole (trunk) to effectively ring bark the tree. With nutmeg production so highly concentrated any serious and fast-spreading fatal condition could have catastrophic effects and consequences, not only for Indonesian producers but the entire world supply of these valuable spices.”

“Since the harvested nutmeg fruit and seed is clearly rich in a wide range of nutrients it follows that trees will require plant-available supplies of these same nutrients. To this end OMEX has a profile of soluble nutrient products including a number dedicated to specific nutrients and therefore containing a correspondingly high concentration of the nutrient in question,” said Peter. This selection of OMEX products includes OMEX K50 (50 per cent soluble K w/v) and the OMEX Kingfol Range including Kingfol Mg (22 per cent), Kingfol Zn (72 per cent), Kingfol Cu (100 per cent), Kingfol Mn (52.8 per cent) and Kingfol Cu/Mn/Zn (eight per cent /33 per cent /11 per cent),” says Peter Prentis. And lest we forget several of these plant nutrients as mineral ions, and including Cu, Zn and Mn, may have a direct anti-pathogen effect on both fungi and bacteria and the fungus-like Phytophthora pathogen.

As regards the use of so-called ‘elicitor’ nutrients to trigger an anti-pathogen response (to both fungal and bacterial pathogenic microbes) Peter Prentis said, “Phosphite is the best-known nutrient ion with this capability and once again OMEX has developed a range of soluble phosphite-based products including OMEX DP98 (37.5 per cent w/v phosphorous as phosphite). They are currently used in this way on a wide range of crops to enhance plant and crop resilience to infection and disease development.”

“Calcium is known to play an important part in bolstering resilience to disease through its key structural role as a component of plant cell walls in the form of calcium pectate,” says Peter Prentis. ‘Sticky’ calcium pectate binds cellulose cell walls together and is therefore vital in developing and maintaining plant tissue strength and integrity. Calcium is one of the least mobile and ‘lethargic’ elements in soil but OMEX has a soluble calcium product called OMEX CalMax containing 22.5 per cent w/v soluble calcium plus nitrogen, magnesium and a range of micronutrients in chelated form. “OMEX CalMax has proved its worth in strengthening plant tissues against disease in a wide range of crops worldwide,” said Peter Prentis speaking from the company’s UK headquarters and manufacturing facilities at Kings Lynn in eastern England where the OMEX range of specialist, soluble liquid and soluble powder products is made.

Nutmeg growers faced with ‘mysterious’ disease-like declines in their trees may or may not be reassured to learn it is not the first time an event like this has happened in South East Asia. In an attempt to wrest the 19th-century monopoly in nutmeg production and trading from the Dutch, the British established nutmeg estates in Singapore starting in 1819. Profits poured in during the late 1830s and into the early 1840s, but economic production did not last for long after that. By 1862 the nutmeg estates in Singapore were finished due to a ‘mysterious’ disease first appearing in the 1840s and described in the archives as ‘nutmeg canker’.