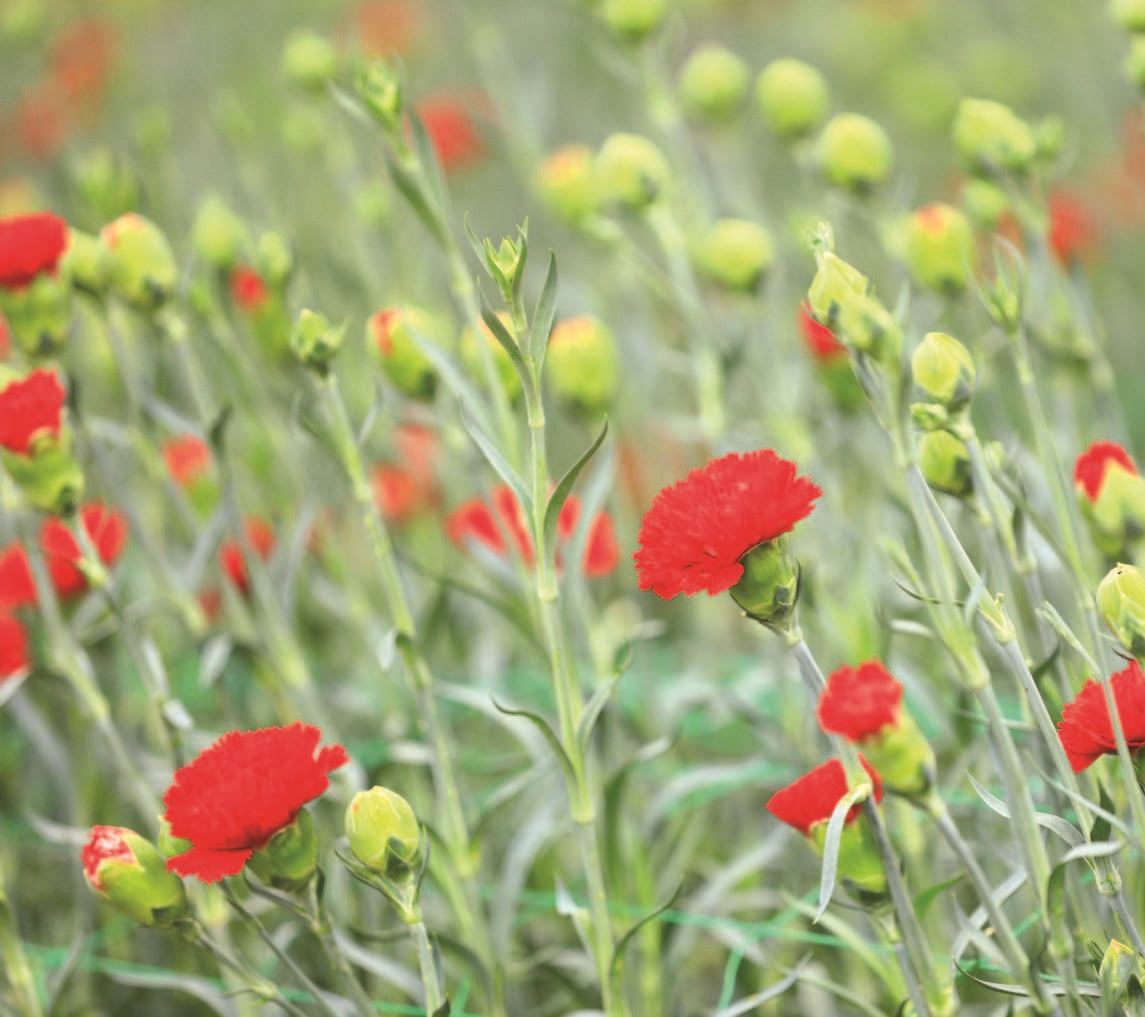 CARNATIONS ARE ONE of the biggest and best lines of cut flowers in the international flower trade. Most species of Dianthus (carnations) originate in the Mediterranean region of Europe and into western Asia but are now grown truly worldwide in commercial floriculture. Carnations tend to do best in cooler climates but can be successfully grown in cooler highland regions of the tropics. However, successful commercial cultivation in these inherently high rainfall areas requires cultivation under opensided plastic shelters, open-ended poly-tunnels, or shade netting where hot sun rather than heavy rain is a problem, to protect the quality of delicate blooms.

Of course, the ideal way to produce carnations irrespective of prevailing climate and weather is within environmentally-controlled  greenhouses. Ideal climatic requirements for carnations are a cool climate with daytime temperature of 18 to 24°C and night-time temperature of 10 to 15°C. The most suitable Relative Humidity (R.H.) falls within the 70-75% range. Under environmentally controlled conditions carnations can be successfully grown throughout the year. Well-drained red loamy soils with a pH of 5.5 to 6.5 are ideal.

The carnation (Dinathus)
Leaves on the carnation plant are typically narrow and greyish-green in colour with a waxy surface. Flowers may be produced singly or in clusters or cymes of up to five flower heads. Flower diameter may range from one to five centimetres depending on species and whether crops are grown for single, large standard blooms or sprays. Many traditional varieties (cultivars) have a superb, clove-like scent although now lost from many modern varieties as plant breeders continue to select heavily for other characters like plant vigour and flower petal colour. 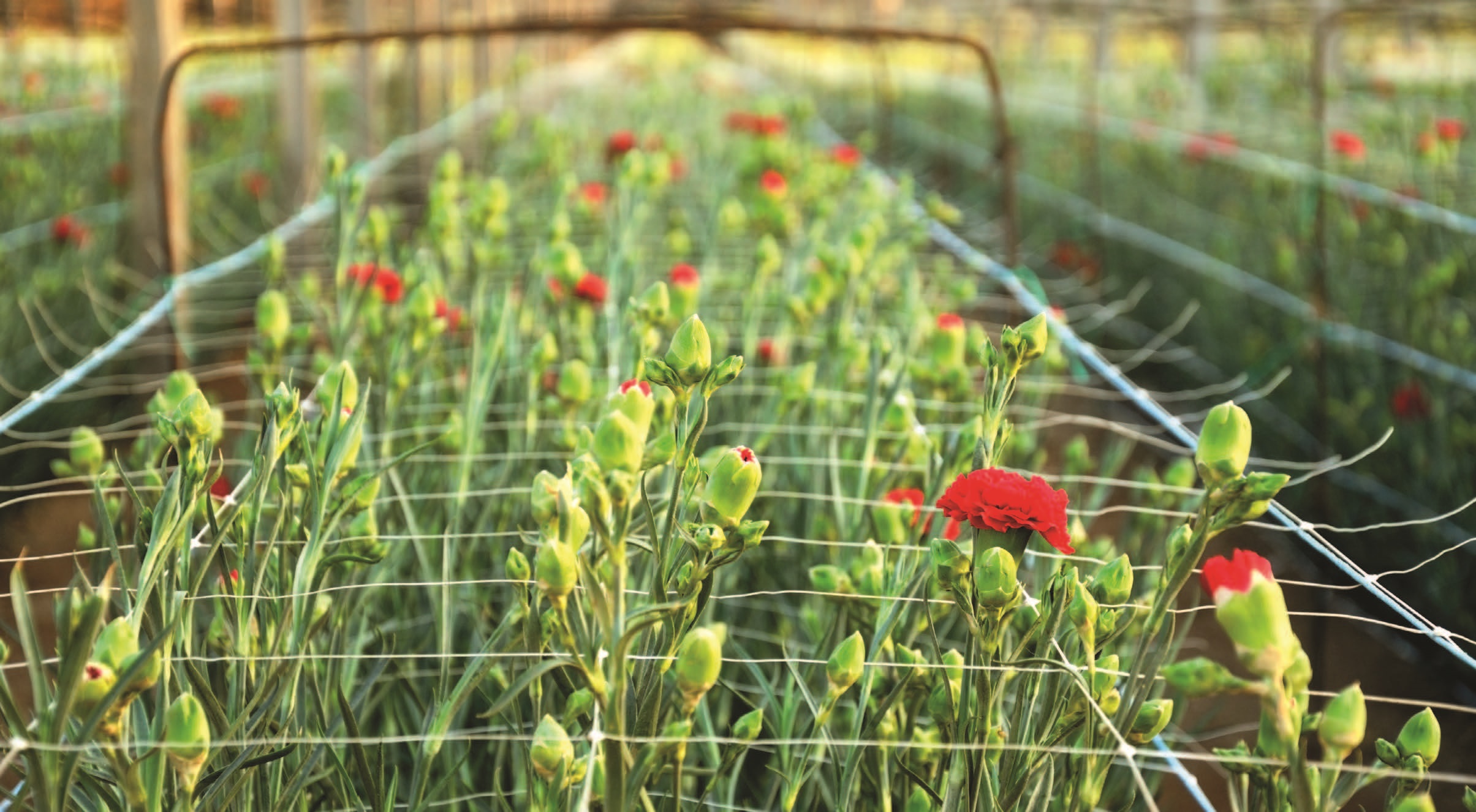 The range of colours in commercial carnations is truly wide with almost every imaginable range of red, pink, purple, orange, yellow, as well as white, and with bicolour types increasingly popular.  As an example, a selection of the most popular varieties by colour and grown for production of standard carnation blooms in India are Domingo (red), Baltico (white), Dona (pink), Diana (yellow) and Solar (orange).

Propagation and planting of carnations
Terminal cuttings for propagation are treated with the plant hormonal preparation NAA (Naphthalene Acetic Acid) at a concentration of 500 ppm for five minutes to induce the formation of adventitious roots. Cuttings are dipped in a liquid preparation of an appropriate fungicide to protect the newly planted cuttings from soil-borne fungal pathogens and disease. Cuttings are planted in previously prepared raised soil beds of 90 to 100 cm wide and 30 to 45 cm in height high at intervals of 90 cm. Plant spacing comprises six rows of plants with rows 15 cm apart and 15 cm  between plants in the same row. This should establish a plant density of 25 plants per square metre. Planted carnation cuttings should have developed a sound root system and be well established within three weeks of planting. Recommended growing conditions within this critical plant establishment period are daytime temperature 20 to 25°C; Nighttime temperature 10 to 15°C, with an R.H. of 50 to 60% and a critical photoperiod of 13 hours. Watering is via micro-irrigation (trickle irrigation systems) with drippers spaced every 30 cm to deliver five to 6 l/m2/24-hour day.  Soluble nutrients can be applied as a fertigation treatment through the micro-irrigation system. Carnations require the full range of macronutrients (NPK), secondary or meso-nutrients such as magnesium (Mg) and trace elements (micronutrients) including boron (B). Carnations have a reputation for displaying a high susceptibility to boron (B) deficiency.

Support, spread (pinching) and disbudding
Carnation crops need secure support without which the plants will bend during growth and cause flower damage. Ideal support systems comprise metal wires interwoven with a nylon mesh, and secured every two metres to strong wooden poles inserted in the ground. Those at each end of the bed should be especially strong and rigid. The metal wire is secured right around and along the length with nylon wires interwoven between the wires in the form of a net. For optimum support, an increasing width of mesh can be used.

Depending on the extent of crop spread required then a single, one and a half or double-pinch method is adopted to remove the shoot tips. Irrespective of the method used early morning is the ideal time to carry out pinching.

Flower formation to harvest
Flower formation starts 120 days after planting and will continue at a commercial rate for up to 18 months. Standard carnation blooms are picked when the outer petals unfold nearly  perpendicular to the stem which is the so-called ‘paint brush’ stage. Spray type carnation blooms are harvested when two flowers in the spray are open and the other buds are displaying some corolla (petal) colour. Blooms are picked daily to leave the basal (bottom) five nodes of the stems for future growth through the development of side shoots.