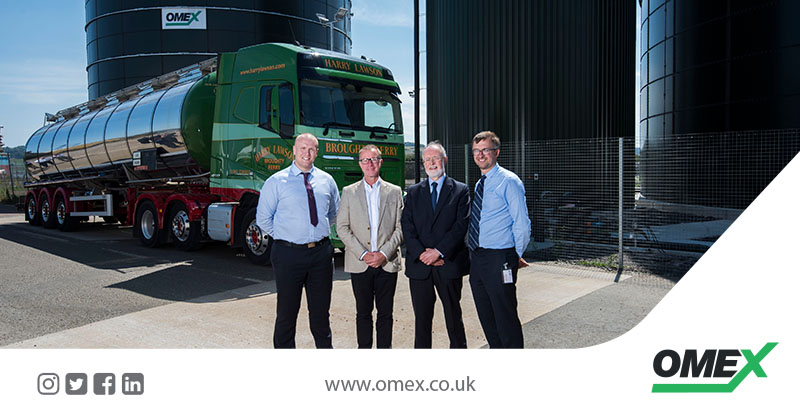 The third generation operations director of Dundee-based haulier Harry Lawson Ltd, Michael Lawson says the success of his business that was started in 1945, is based on solid family values and a hard work ethic.

This attitude is the reason why Michael believes the decision to become OMEX’s main haulier for most of Scotland’s arable farming heartland has a long term future.

“We met up with the OMEX management team in 2016 to discuss how we might work together and immediately had a good feel about the company,” he says. “It’s a family run business with family values, just like our own. We have good synergy with OMEX. It’s a company that wants to get the job done and if its success south of the border is anything to go by, we see a very healthy relationship developing in Scotland in the coming years.”

Harry Lawson Ltd began operations in 1945 when the founders, Harry Lawson and his wife Dora started a local carrier service between Dundee and Carnoustie. Their son (Harry also), joined the company in 1961, at which time the fleet size had increased to 12 vehicles.

The business moved to its current premises in Dundee on Balunie Drive in 1974 and in 1977 Harry became managing director with ‘Old’ Harry retiring in 1981.

In the early 80’s as general haulage became more difficult the business focused on niche markets with road tankers becoming a primary focus. Michael joined the company in 2004, and now runs one of the largest tanker and general haulage fleets in the UK.

“Our current fleet consists of 70 vehicles and in excess of 150 trailers. Harry Lawson Ltd also runs a modern and fully ADR compliant, extensive and diverse fleet of over 80 road tankers,” says Michael. “We pride ourselves not only with the size of the fleet but also the condition and image that we portray at all times. Our customers expect quality and through the contribution and teamwork of our 80 members of staff, including extensive in-house workshop facilities, we continue to provide our customers with both performance and reliability in all our operations.”

In little under two years Harry Lawson Ltd now delivers around 20,000t/annum of OMEX liquid fertilisers to farms in Aberdeenshire and the south, out of Port of Dundee. Michael says all the signs are there for continued growth with significant investment from both OMEX and Harry Lawson Ltd already paying dividends.

OMEX is confident that it will progress in Scotland and we are experiencing a lot of interest from farmers in liquid fertiliser for use on all arable crops, especially in the potato sector.