Soft fruit production is approaching a peak period of fertigation inputs to maximise yield and where fertigation cannot meet the demands of the developing plant, drought stress and potentially mineral deficiencies can occur.  The first signs of a stressed crop is usually calcium deficiency because it needs an active transpiration stream to move it through the plant.  Calcium is used to maintain the structural stability and permeability of cell walls and so a poor supply of calcium causes tissues to fail at growing points such as the apical meristem or during flower development. A deficiency manifests itself as either tip burn or in the worst-case scenario, the loss of entire flower trusses in strawberries and the premature dropping of fruit in blueberries.

To alleviate these symptoms, and improve horticultural nutrition, ensure that fertigation is applied to correspond to the weather conditions thereby regularly feeding calcium to the developing crop.  Where fertigation cannot keep up with the increasing demands of the crop, consider foliar feeding with CalMax Ultra, a multi nutrient foliar feed, rich in both calcium and boron, nutrients that are synergistically linked to one another. It contains a unique ingredient called AXM, or a pump primer which is a molecular crowbar enabling calcium to enter a cell even during periods of poor transpiration.

In the east, the UK is currently experiencing lower than average rainfall, challenging water resources in the region.  To ensure fertigation is distributed throughout the coir as well as possible, consider applying Kobra to the stock tank. Kobra is a wetter which will give even penetration throughout the growing media by reducing the surface tension of the solution.  Regular applications result in fewer dry pockets within the compost and less shrinkage within pots. 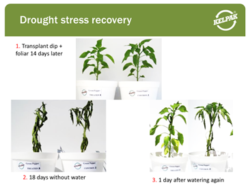 Figure 1 Kelpak treated crops were able to recover from drought stress compared to an untreated control.

During conditions of low rainfall and low relative humidity, plants can be moisture stressed due to the arid environment, exacerbated during high temperatures by rapid air flow through polytunnels. Drought tolerance and recovery can be improved with the application of Kelpak early on during the growth cycle. The improved rooting and establishment which accompanies Kelpak applications provides a wider root network to harvest as much moisture as possible from the surrounding media.

Figure 2 Trials in long cane raspberries showed a 53% reduction in sodium when treated with DeSaltus 2.0 compared to the untreated control.

To discuss the above products or advice on horticultural nutrition to aid your growing strategy, contact your local OMEX technical horticultural advisor, here.