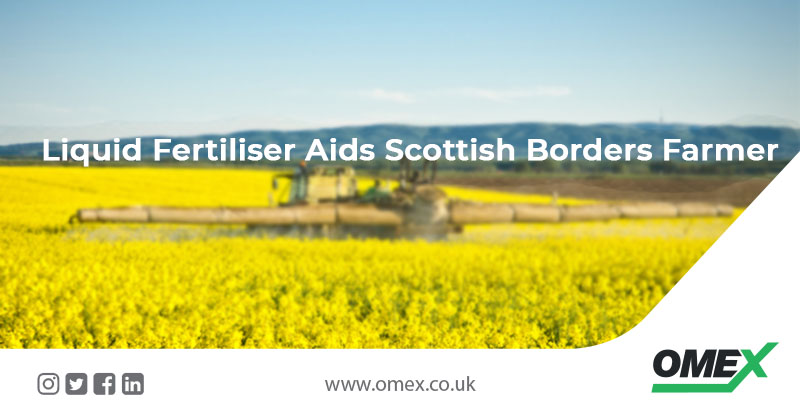 The 1800ha arable operation based in Kelso grows winter wheat and barley, oilseed rape, oats, vining peas and potatoes. Variable soils ranging from sand on the river side to heavy loamy sand and with indices typically below 2 can still achieve wheat yields of 9t/ha, feed barley yields of 7.5t/ha and oilseed rape yields of 4.5t/ha.

“In my previous farm manager’s job we used OMEX liquid fertiliser and so I know the advantages it offers over a granular system.” says Mr Parsons  “The sprayer driver tells me when a tank is empty and I then speak to Moseley Transport who come and refill it. Each tank when empty takes two loads to fill it up. All the tanks are labelled up which makes it easy for the delivery drivers.

Mr Parsons applies 1200t of liquid nitrogen to the cereals in three applications. The first two are a 20N:12.5SO3 mix applied around February 20th and March at a rate of 60kgN/ha and 80kgN/ha respectively, followed by a third application in April of 26N:5SO3 at a rate of 60kgN/ha. Oilseed rape receives three applications of the 20N:12.5SO3, the first two applied at the same timings as the wheat with the third going on around April 20th.

The potato crop receives 7.5N:12P:9 SO3 injected on the planter while a starter fertiliser (14N:14P:0K) for the oilseed rape is applied when drilling the crop using a Simba SLD in a one pass system. Oilseed rape is also sprayed with Oilseed Extra directly to the pods in June at a rate of 20kgN/ha.

Mr Parsons says that accuracy of application with liquids is much better than solid fertiliser. An added advantage is that the farm sprayer has GPS and Auto Shut-off so there is no overlapping or wasting product in the hedge. Fertiliser is applied accurately across the full working width of the boom so crops are much more uniform.

“We also find that the weight distribution of the sprayer means that we can still travel in wet conditions with minimal compaction issues,” he says. “The solid applicator becomes very back heavy when full and can easily get stuck. The weight in the sprayer is spread evenly across all four wheels and is therefore more evenly balanced.”

A 13000 litre bowser is used for back-up. And a mixer tank on the front of the of the bowser means the main tank can always be kept clean of pesticides.