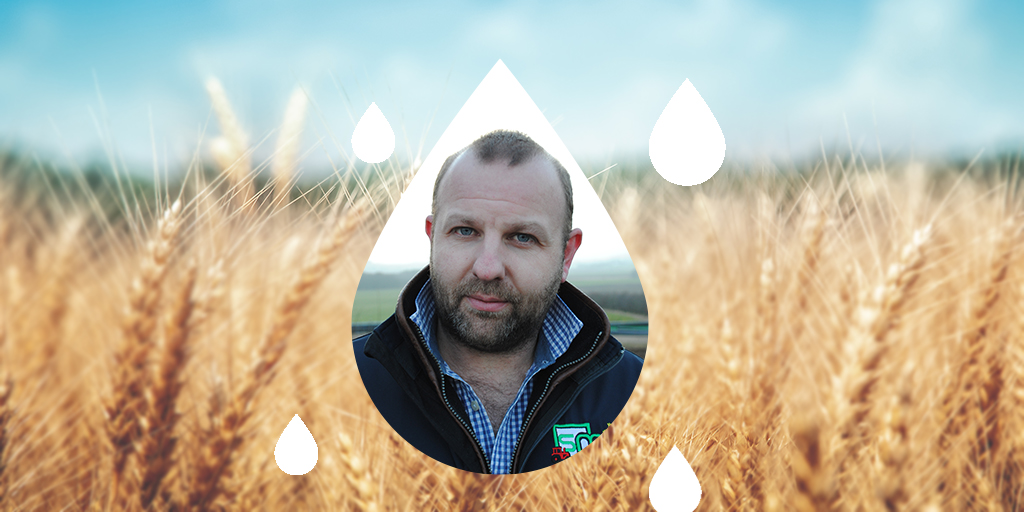 Introducing the nitrogen stabiliser Didin to the liquid fertiliser regime on a 4500 acre arable enterprise in Aberdeenshire has taken some getting used to says manager Marc Skivington, but having trust in the approach has definitely paid dividends.

Apart from freeing up significant amounts of time across the business, especially at busy periods, Didin and liquid fertiliser has helped produce more even crops and improve the environmental profile at Slains Park Farm near Montrose, plus saved over £33,000/annum in contracting fees.

This is the sixth year of using OMEX liquid fertiliser on the farm. Didin was introduced to the business last year following on-farm trials.

Didin contains urease and nitrification inhibitors and tank-mixing it with liquid N+S converts it to a slow release fertiliser. As a result, there’s no need to split top-dressing applications, all the nitrogen is applied at the time of the first dressing and spraying liquids with Didin earlier in the season when conditions are more suitable has helped to minimise scorch risk in the cereals.

The farm employs a Bargam Grimac 28m self propelled sprayer with 4000 litre capacity to apply Nitroflo 24+S plus Didin at 6l/ha, delivering 160kgN/ha plus 50kgS03.

“We find that liquid fertiliser is so much more accurate than a solid system, and the environmental benefits are obvious, especially on our grass margins,” says Mr Skivington. “There is no waste or over supply of product and there are no bags to get rid of. Our stores which used to house solid fertiliser in bags are now filled with machines. Also granular fertiliser that is left in the hopper needs to be spread to get it out of the spreader, whereas with liquids it just needs pumping back into the tank.”

He believes some growers are reluctant to try Didin because they think it restricts yield, but from his experience that is definitely not the case.

“It also involves one application early in the season when there’s usually more moisture about, and before spring work starts with daffodils, spring barley, pea drilling and potato planting.”

The fear of applying a crop’s entire nitrogen requirement in one application is not an issue for Mr Skivington, who has seen no detrimental impact on crop performance. In fact Didin appears to make the crop healthier and therefore better able to fight against disease, in his opinion.

The impact of using Didin has also been felt in the farm’s oilseed rape crop, a key benefit being that there is no need to go into the crop to spray during the growing season when it is more vulnerable to mechanical damage.

The farming operation employs eight men but in March, two are sub contracted to the East Coast Viners pea group. This seriously depletes the work force at a really busy time, and used to mean that contractors were brought in temporarily to replace them. The introduction of Didin has changed all that now, and the existing workforce can manage without the need for extra help. At peak workload periods the farm could easily have five contractors employed on the potatoes and silaging alone.

“Switching to liquid fertiliser and Didin has been a game changer for us,” says Mr Skivington. “You need a certain mindset though to adopt it as part of the management programme. Including slow release nitrogen removes the time and workload pressure.”

“Some farmer’s might be nervous about not being able to apply their nitrogen when the crop looks like it wants a boost,” says Mr Skivington. “But, be rest assured that the slow release system works really well and it has had a huge impact on the management of our business.”