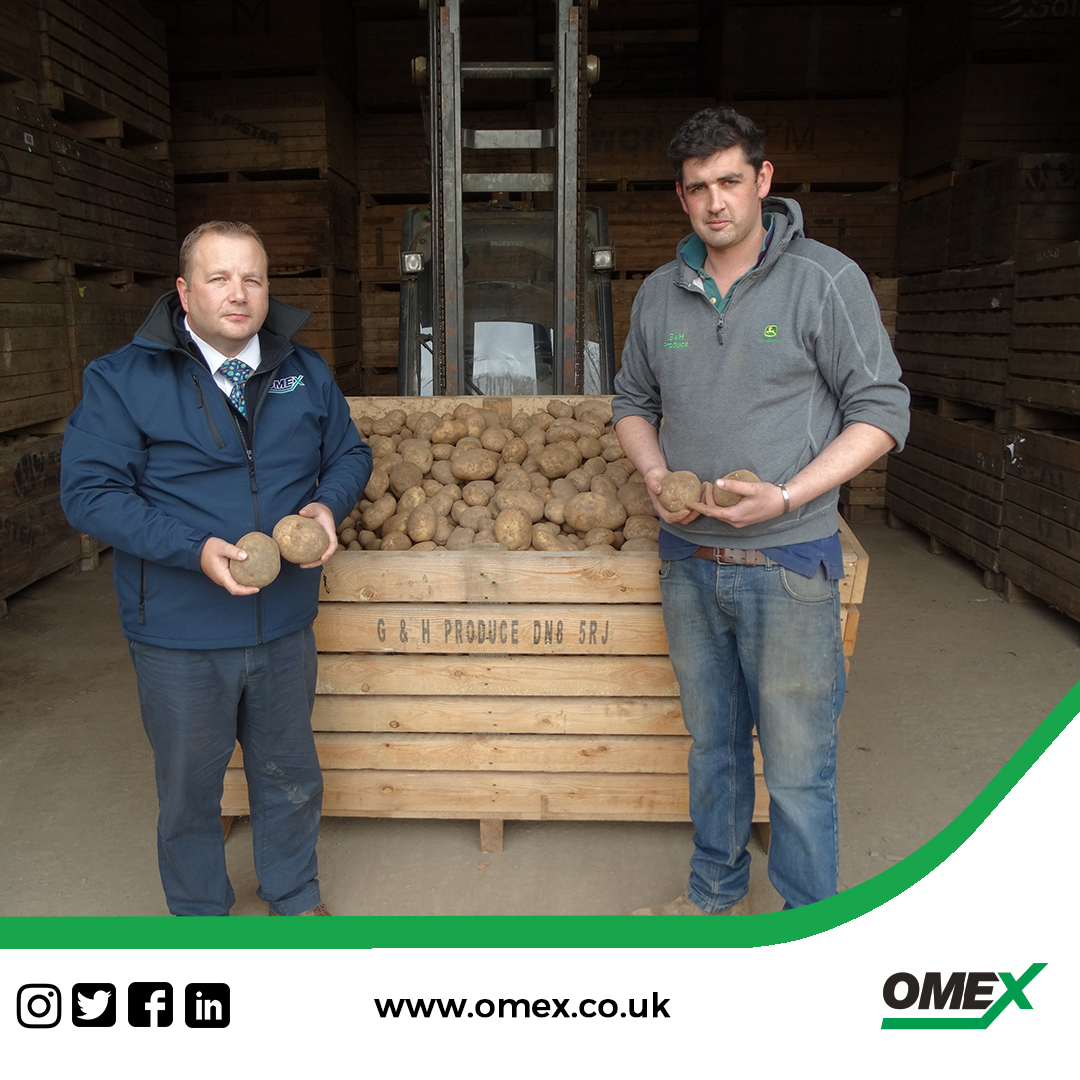 Switching from a granular placement fertiliser regime to an OMEX solution and suspension system has knocked about 30% off the total fertiliser cost as well as improving the logistical planning on a 250 acre potato operation in Yorkshire.

Root crop growers Tom Hill and Andrew Goldthorpe have been business partners since 2011. The company based out of Fishlake near Doncaster grows 250 acres of free-buy potatoes for chipping and pre-pack markets.

Next year the potato operation is expanding to 400 acres, but the transition will mean strategic management changes to maintain efficiencies and economies of scale. In particular, the fertiliser regime has come under constant scrutiny and focus. Last season for the first time OMEX suspension fertilisers have been applied across the entire potato acreage, having replaced an historical precision granular application system. The need to improve efficiencies by reducing labour and machinery as well as a need to redirect management time, were identified as the key drivers to change.

The business started with 10 acres of potatoes in 2011 which also happened to be one of the worst growing years on record. This increased to 25 acres by 2012 which ironically was one of the best years on record for growing potatoes. The company has come a long way in a relatively short period of time.

Historically Mr Hill chose to place granular fertiliser using a front of the tractor mounted applicator at planting. He says it was a very good system except for the fact that at the end of the row or where there had been a wheeling from the planting process, there was always fertiliser still visible at lifting.

“I got fed up with it basically. I was told it was just the casing, but I didn’t agree. It was difficult for me to get my head around the fact that I was leaving a significant amount of fertiliser on rented land for the next crop to benefit from,” says Mr Hill. “There was one example, where I went back to a field that had grown our potatoes and had subsequently been drilled with wheat, only to find strips of greener wheat in areas that directly corresponded to where the potato rows had been previously.”

Mr Hill points out that another reason for switching systems was that he could not get enough potash into the crop when the granular fertiliser was placed at planting. He would therefore have to go in prior to planting with extra potash, which meant another pass and more expense.

Having switched to OMEX suspension last year he has saved about four days worth of downtime due to not having to get on and off the tractor to unblock nozzles, to fill up the hopper with fertiliser, wait for new supplies and disposing of all the empty bags.

Mr Hill was introduced to the principle of OMEX suspension when the fertiliser company’s district sales manager Dean Waddingham came to see him. The business was also already aware of OMEX having used Protein Plus on the wheat as an ear wash application.

“Each droplet of OMEX suspension fertiliser contains exactly the same nutritional composition as the one before it, the same cannot be said for granules. These are all different weights and sizes which must affect the spread pattern and distance accuracy. The whole OMEX system is completely traceable and transparent. I can trace every batch of fertiliser back to the factory in Bardney with an accurate analysis of every load.”

“Environmentally the OMEX suspension system knocks the socks of any granular equivalent application too,” says Mr Hill. “There is no wastage, we only pay for what we use and the fertiliser is spread accurately right up to the field boundary and not into the ditches or hedgerows.”

Mr Hill adds that his business runs its own lorry so is able to pick up fertiliser loads directly from Bardney to assist their own application schedule. Local contractor Robert Todd applies all the suspension fertiliser prior to planting.