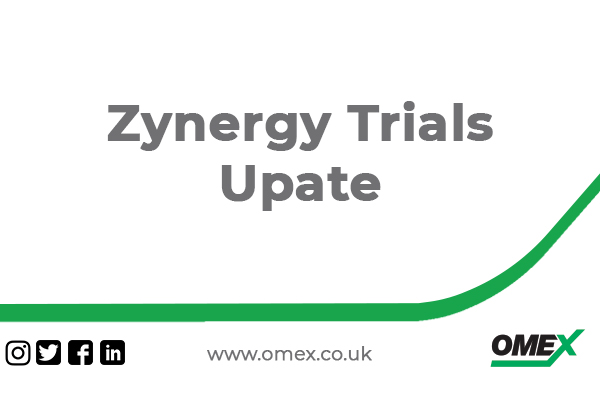 Zynergy® is a novel foliar nutrient formulation of copper and zinc from OMEX which can complement the fungicidal and bactericidal activity of agrochemicals. When used as part of an integrated crop management programme it has the potential to deliver higher yields in a range of crops.

Monitoring of plot trials and field comparisons indicates that winter wheats, especially later drilled crops are currently losing green leaf canopy due to the prolonged wet weather and associated poor conditions for root growth.  This can have a significant impact on yield potential and on disease levels.

Targeted foliar nutrition can help plants to tolerate stress and strengthen cell structure even when root uptake is limited. Trials have shown that Zynergy at 1.0 l/ha with T1 & T2 fungicides can improve crop health, overall disease control, and final yield.

Three years of independent replicated plot trials on potatoes, under extreme blight pressure at the Eurofins site in Derbyshire, have shown that when Zynergy is incorporated into the regular blight spray programme, it has resulted in improved disease control coupled with with an economic yield response. In the 2016 trials, there was a 14.5% increase in yield where Zynergy was included, giving more than a 30 to 1 return on investment.

Include 0.5 litres/ha Zynergy with each blight fungicide application at standard 7-10 day intervals throughout the programme.

Zynergy in Sugar Beet trials in Cambridgeshire last year, with two applications at 1 litre/ha in early and late June, showed an increase in green leaf area of 10%. Final yield increases of 20% were also seen.