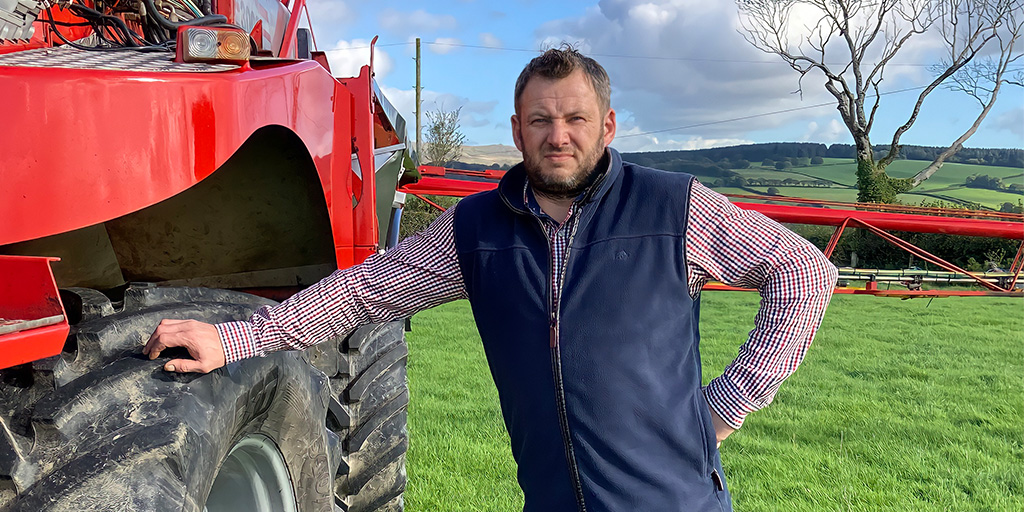 Liquid fertiliser applied to grassland in the south west is having a positive impact on silage yield and quality, application efficiency and the environmental footprint. Lewdown-based contractor Phil Yeo’s decision to switch from a granular fertiliser application operation to one that offers liquids is experiencing significant growth in business.

Mr Yeo’s business, F J Yeo Ltd, is based at Higher Widdecombe Farm, where it services clients on both sides of the Cornwall and Devon border. His family has been contracting since the 1960’s and in 2018 when he took over the company, it was applying up to 2,800ha/yr of granular fertiliser.

In the years since, the company has introduced a liquid nitrogen fertiliser application service due to a growing interest in the concept by a number of existing customers. This year Mr Yeo will have applied OMEX liquid nitrogen fertiliser (26:0:0:5) to around 60% of the 8000ha of grassland he operates over. There is also a contract farming division to the business which operates across 141ha of arable land and 81ha of grassland.

In 2019 a key client of Mr Yeo’s decided to switch from a granular to a liquid fertiliser system. “We made some enquiries and were soon convinced of the benefits so installed two 56t tanks, and replaced a 24m, 2500 litre Bateman RB15 sprayer with a 24m, 3000 litre Bateman RB26 to increase our spraying capacity.

“We were told that liquid fertilisers work much more efficiently in dry conditions than a granular equivalent,” he says. “Our client operates a multi cut system – up to five cuts a season – and so he wanted to speed the process up due to unpredictable weather and the short season.

“With a granular fertiliser he would have to wait until the ground was wet before applying it, whereas with liquid fertiliser he could go on straight away in all weather conditions, and the product would start working within 20 minutes of application.”

In his first year Mr Yeo applied 411t of liquid fertiliser for grassland customers in the south west. In 2020 he applied 641t and by the end of 2021 he was up to 1199t. Over 80% of this was applied to grassland for silage and grazing.

“Basically we were given the opportunity to carry out the liquid fertiliser contracting work and we have never looked back,” explains Mr Yeo. “Interest in liquids really started in our first year because it coincided with granular fertiliser being in short supply with farmers often waiting for up to six weeks. Our OMEX liquid fertiliser is delivered by Hugh Jackson who never leaves me waiting very long.

“A good example demonstrating the difference between the two fertiliser systems was in the dry spring of 2020 when there was not a day of rain between some fertiliser applications and harvest,” he explains. “Granules were still on top of the soil, still not fully dissolved when it came to harvest, whereas land applied with liquid produced a vastly better yield because of a better take up.”

In the first season Mr Yeo had 15 customers and this has increased to over 60 this year. He says farmers are really seeing the results now having switched from granular fertiliser to OMEX liquid fertiliser.

“We think that a liquid system is at least 20% more efficient than a granular equivalent,” he explains. “Volatilisation is a real issue with granules and we estimate that up to 25% of the nitrogen is being wasted into the atmosphere. On a liquid system, 100% of the product starts to be taken up by the plant immediately after application.

“Visually it is easy to see the difference between the two systems as well,” he adds. “Liquids ensure even and accurate application right up to the field boundary so the grass swath can achieve its maximum yield and quality potential across the full width of the field. Having GPS RTK and Auto Steer on board also means we are virtually 100% accurate with liquid applications. This is not possible with granular fertiliser application.

“We calculated that on a 350ac dairy farm applying OMEX liquid fertiliser to the grass four times a year, increased grass yields by up to 11% from the headlands alone. Based on average silage yields of 4.5t/ac and a total tonnage of 567t of grass/year costing £25/t, it equates to an extra £14,000 of grass.

“Speed of nitrogen uptake from liquids is also a huge factor, especially on a multi-cut system,” he says. “We think it gives us an extra four days of grass growth over a granular equivalent.

“And of course there is the fact that our customers only pay for what nitrogen fertiliser they use and there is no waste. What isn’t there to like about a liquid fertiliser system. I only wish we had thought about the obvious benefits sooner.”

Mr Yeo adds that liquid and granular fertiliser system cost about the same. Application costs for liquids is about £6.18/ha more to apply than granular fertiliser, but this is more than offset by not having to pay for the disposal of fertiliser bags, as well as improvements to accuracy, yield and efficiency.

“The flexibility of a liquid system is having huge impact on our customers, especially as weather no longer stops us from getting on, except extreme cold and heat,” explains Mr Yeo. “Scorch can be an issue in these situations, which is why we always use Accurate dribble bar nozzles rather than standard spray nozzles. It’s a huge myth that liquid fertiliser causes a lot of crop scorch, however it does happen, but provided it is applied responsibly then there shouldn’t be a problem.

“Liquid fertiliser is a relatively new concept down here in the south west,” he says. “Farmers are still using their old granular applicators, and they think they are saving money, but we can do it for the same price on a contractor applied basis. And a liquid system saves so much time which we all know is so precious in farming.”

Want to find out more about switching to a Liquid Fertiliser system? Speak to your local FACTs qualified expert, here.