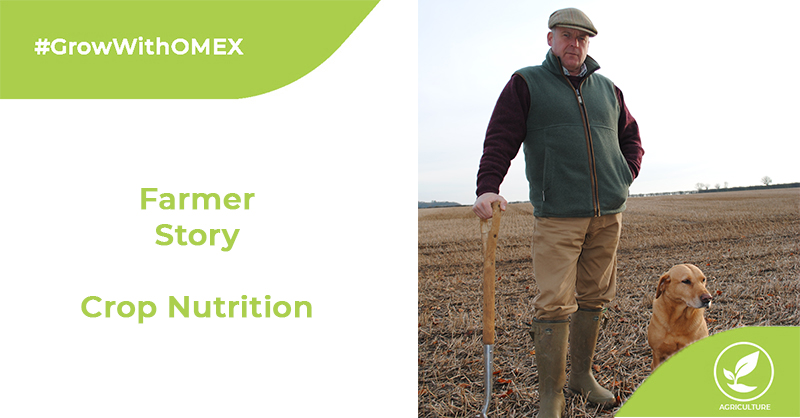 Fine tuning crop nutrition helps to control input costs and maximise profitability for Lincolnshire potato grower Robert Nelstrop. Only putting fertiliser that is actually needed by a crop on a seasonal basis has both financial and environmental benefits.

Westfield Farm near Branston uses a combination of OMEX liquid and suspension fertiliser plus slow release liquid nitrogen and foliar products on 55 ha of packing varieties grown for Tesco, via Branston Ltd. Varieties include white pre-pack Nectar, Lanorma and Georgina and red pre-pack Desiree and Mozart, with an average yield of  over 54 t/ha.

Mr Nelstrop has cold storage for 1500t as well as a further 700t at Branston’s own facility 2km away. What is not stored goes to the packing plant straight off the field.

Soils at Westfield Farm are mainly limestone brash. An application of pig manure helps keep soil indices at three and four. OMEX is employed to deliver and apply the bulk of the remaining fertiliser requirement.

“We used to apply our own solid fertiliser,” says Mr Nelstrop. “But with men and machines tied up elsewhere at busy times of the year, we needed to offload the responsibility to contractors. Historically we operated a disc spreader to apply solid fertiliser up to 24m which wasn’t very accurate. Liquids have improved on this and they are much more convenient; require less storage and handling; and there’s no waste to dispose of, so our environmental footprint has improved.”

OMEX manufacture and deliver suspension fertilisers to the farm where dedicated local contractor Tom Dobbs applies using his 36m machine. The farm employs its own 24m Bateman self propelled sprayer to apply liquid and foliar fertiliser.

“When we are spraying our potatoes we prefer working at 24m because after destoning, heaps of stones between the rows could cause boom yawing at 36m,” says Mr Nelstrop.

Although OMEX offer customers a free soil sampling and analysis service, independent soil sampling is carried out on fields prior to organic manure being applied. The farm makes its own nutritional recommendations, which are passed on to OMEX at Bardney who provide bespoke mixes.

Mr Nelstrop says up to five suspension analyses can often be needed to match the soil sampling deficiencies. OMEX stands out over other fertiliser manufacturers because it can produce bespoke mixes to suit any soil analysis, he adds.

“Fine tuning a crop’s nutritional needs on a field by field basis gives us an advantage and helps us to maximise the yield and quality potential,” says Mr Nelstrop. “We apply a base dressing of 140kg/ha of nitrogen plus Didin, then we fine tune requirements according to the season. In 2018 we had a very short growing season due to the late planting and subsequent high temperatures so there was no need for further fertiliser on the crop.”

Didin is a urease and nitrifaction inhibitor, that allows the full season’s nitrogen requirement to be applied at one time, whilst reducing nitrate leaching losses and nitrous oxide emissions.

Mr Nelstrop irrigates his light stony soils frequently but says that applying Didin keeps the nitrogen from being leached out of the soil.

“I specify Didin on all our potatoes,” he says. “We have been in and out of using it over the years but now it plays an increasingly strategic role on our farm.”

Nitrogen and Didin are applied pre-planting to avoid any issue that might otherwise occur at the desiccation stage with extra greening and regrowth. Foliars are also applied including magnesium (bittersalz), liquid manganese, Bio 20 at 5l/ha and Folex N.

“The logistics of spreading OMEX suspension fertiliser is so easy. I send a map to OMEX salesman Chris Pacey who liaises with the contractor,” says Mr Nelstrop.