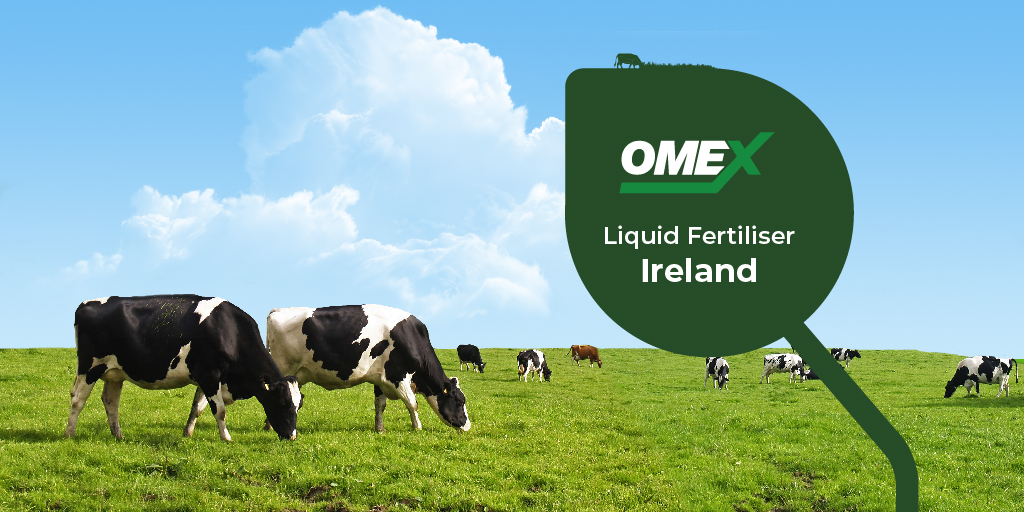 The benefits of Liquid Fertiliser for farmers in Ireland.

Livestock farmers in Ireland could benefit from higher yielding and better-quality grass and silage where liquid nitrogen plus sulphur has been applied to leys, according to dairy and beef nutrition consultant and farmer Brian Reidy of Premier Agri Supplies based in Tipperary.

Traditionally livestock farmers have applied granular fertiliser to their grassland he says, and until recently it was rare to see liquid nitrogen on any livestock farms. However, Mr Reidy thinks that could all be about to change now that liquid fertiliser manufacturer OMEX Agriculture has committed to supply product to farmers throughout Ireland.

“Despite there being more than 17,000 dairy farmers and over 70,000 beef farmers, liquid fertiliser has always been associated with cereal farmers who have the economies of scale to justify their own machines, while dairy and beef farmers have relied on granular fertiliser applied through their own fertiliser spreaders or the services of a contractor,” he says.

“Spreading fertiliser has not always been considered a precision job on a lot of Irish farms. Some don’t calibrate spreaders regularly and many need to be updated. The time it takes to apply fertiliser or the importance of accuracy is not always appreciated.”

“OMEX suppliers have been testing liquid fertiliser on Irish farms for a number of years,” says Mr Reidy. “This was so that livestock farmers could see the visual comparisons between liquids and granular fertiliser. I have seen grass that has liquid fertiliser applied to it produce 15% and more yield than a granular system in the same field. It has been shown that a liquid system could see a 10 to 15% reduction in the units of nitrogen applied due to improved accuracy, increased effectiveness and less volatilisation.”

“In field work carried out in 2021we saw better growth from OMEX Nitroflo when compared to granular Sulfa CAN per unit of nitrogen applied,” he explains. “On grazing ground, 20 units of Nitroflo produced over 30% more Kgs of grass DM/ha than 27 units of Sulfa CAN over a 22 day growing period.

“We have also been trialling urease inhibitors to help lower our ammonia emissions,” he adds. “Where we have been applying Nitroflo with and without protection from urease inhibitors, it resulted in an increased growth rate per day over Sulfa CAN. The urease inhibitor improved nitrogen efficiency further and produced more Kg DM per Kg of nitrogen applied.”

Other benefits of a liquid system he notes are that a granular system is dependent on rain to work efficiently and when grazing or silage ground is sprayed with OMEX liquid fertiliser there are no peaks and troughs in terms of yield. Visually crop consistency is noticeable across the whole field too, right up to the field boundaries.

If applying liquid fertiliser after each rotation, the cows get a more consistent diet as the nitrogen is used more efficiently, he says.

In 2021 Premier Agri Supplies covered a significant acreage of grazing and silage ground in Tipperary, in fact trebling the acreage of 2020. A large proportion of farmers are now showing an interest in the liquid nitrogen concept because of the clear benefits, and because there is a financial need to reduce nitrogen use and improve the environmental footprint.

“A future EU regulation will dictate that chemical fertiliser must be applied by a GPS guided implement by 2023 for those in a nitrate derogation,” says Mr Reidy.

“Farmers may be reluctant to invest in new kit or to commit to the labour and time required to comply to this,” he says. “Therefore, there is increasing demand for contractors and local distributors to do the application job for them. Also, with the price of fertiliser on the increase, it is becoming more crucial to apply product more accurately and in the right place. Getting fertiliser application wrong is an expensive mistake.”

Irish farmers already rely on contractors for many of the operations on farm including silage and hay making, baling and reseeding. So, Mr Reidy says that it should not be a problem for contractors to apply liquid fertiliser too as part of their service.

Want to find out more about Liquid Fertiliser in Ireland? Contact us, here.