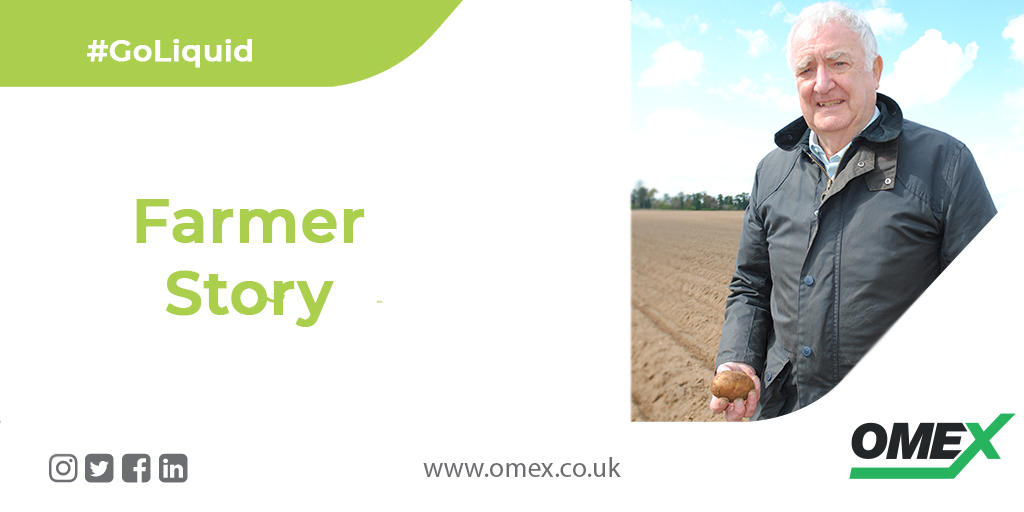 Suspension fertiliser that includes an innovative additive used to help make phosphate readily available in calcium rich soils is having a positive impact on a Suffolk grower’s potato business.

Derek Palmer, of D Palmer and Sons, grows 250 acres of potatoes on rented land up to 10 miles from the farm. A further 200 acres of owned land supports a wheat and swede enterprise.

Growing profitable potatoes is a family affair with Derek’s wife Susanne and their children all playing a role. The aim is to target the early crop with the potatoes being taken directly to market from the field. But the business also has 1500 tonnes of storage in two 500 tonne stores and a further 500 tonnes of cold storage.

Nutrition plays a key role in maintaining a viable potato operation and the Palmer’s business   has relied increasingly on agronomy advice, and also nutritional advice from OMEX Agriculture.

“Liquid and solution fertilisers definitely help to get our crops established early and in my opinion there is a yield benefit, although it’s unquantifiable. OMEX suspension fertiliser is accurately applied to the full 36m, which produces a uniform crop right across the field.”

The business has used OMEX suspension fertiliser for over a decade and the fact that it is a delivered and spread service also takes out a lot of the management hassle it would otherwise face. Soils are all tested in the autumn or early spring and bespoke mixes are produced by OMEX based on a field by field analysis.

Suspension fertiliser tankers are delivered directly to fields just prior to potato planting and the local OMEX contractor Matt Benstead liaises with the factory at Kings Lynn and the district sales manager Ben Blom before application. The farm no longer has to employ its own men and machines for the potato fertiliser operation.

The fertiliser mix includes the base N:P:K plus magnesium where appropriate and an additive called Polymex at 5l/ha, which helps prevent phosphate lock-up on the calcium rich soils.

“Phosphate is the key element and this needs to go on ideally as a liquid so it’s immediately available to the crop,” he explains.

“We have a job to grow a second wheat here,” he says. “But, first wheat can do really well after potatoes, which suggests that that there must be residual P:K in the soil even though one often thinks that the previous crop has run out of steam the previous year.”