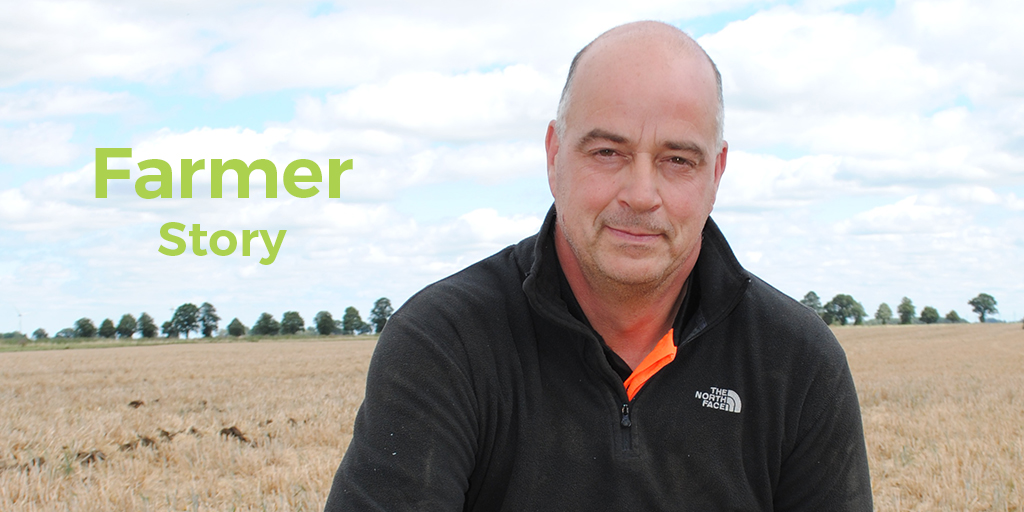 Autumn applied liquid fertiliser is helping a Cambridgeshire grower achieve better crop establishment before the winter. For oilseed rape this strategy is having a positive impact on tackling flea beetle and for cereals it helps out-compete blackgrass.

Farm manager Martin Stuffins of M H S Farms, Park Farm, Thorney, switched from applying farmer applied granular fertiliser to contractor delivered and spread OMEX suspension four years ago, when land was being taken back in hand and the existing approach to applying fertiliser could not cope with the extra workload.

Like so many farms in the area, blackgrass – much of it resistant – affects large parts of the farm. In an attempt to reduce blackgrass levels a number of strategies have been implemented. Some second wheat is being replaced with a break crop such as maize or sugar beet, and various environmental schemes have been introduced that take land out of production.

But, Martin is also an advocate of using fertiliser to enhance a crop’s ability to out compete blackgrass when it is at its most prolific. He believes that good establishment is the key to giving a crop its best chance of competing with blackgrass for light and nutrients.

The same strategy of applying fertiliser in the autumn rather than the spring has been adopted for oilseed rape, where a healthy crop with enhanced rooting going into the winter is better able to grow away from the flea beetle in the spring.

“Last autumn was perfect for getting the fertiliser applied,” says Martin. “We were able to get our OMEX suspension fertiliser applied before the wet weather engulfed the farm. Plants put down good roots and despite the appalling and relentless weather, they recovered in the spring.

“Had we not applied our fertiliser in the autumn, many of our crops would have died before the spring,” he explains. “A stressed crop does not perform as well as a healthy crop.”

Last year, Martin says that all autumn fertiliser was applied by September 23rd, just before the rains came. OMEX suspension fertiliser remains stable in the soil profile and does not leach out. He also managed to apply all the pre-emergence herbicides, so the combination led to good control of blackgrass.

Winter wheat yields average 10-11t/ha although this year the challenging conditions have seen variable results. Quality is good though with 78-81 Bushel weights and Martin puts this partly down to getting the fertiliser on in good time.

“When it comes to the spring it is good to know that the crops nutritional needs have mostly been achieved,” he says. “Our spring drilling started on March 10th.”

“We meet in spring or summer with our Agrii agronomist Tom Land to discuss field planning and organise cropping and fertiliser regimes.”

“We then send our fertiliser requirements to OMEX contractor Richard Redhead who organises all the applications for the farm,” explains Martin.

The farm used to apply all of its own granular fertiliser with a 36m applicator, but as land has been taken back in hand (1500 acres in last four years), the fertiliser regime has had to be restructured.

“Application accuracy using granular fertiliser was not really an issue for us, but the timing definitely was,” says Martin. “In the future we might well look as variable rate P:K application in suspension.”

Since switching to OMEX suspension fertiliser the soil indices across the farm have balanced out. Phosphate has always been the main issue according to Martin. Soils are medium clay to loam with some silt.

“We soil test on a four year cycle so it will be interesting to see how the indices have changed.”

Application cost of granular fertiliser using the farm’s equipment and labour was about £11/ha, which is slightly higher or the same as a contractor delivered and spread service from OMEX, says Martin. Now the fertilising operation requires no farm involvement and the tractor and man that was used is now employed on cultivation or harvest work.

“There are several additional benefits we have experienced having switched to OMEX suspension,” explains Martin. “There is no bag disposal or storage needed and we only pay for what we use. The quality of the nutrients delivered to the soil has also improved. Each droplet of suspension fertiliser contains the same proportions of essential elements as the next droplet. Granular fertiliser by comparison is so varied and a lot of it is dusty too which would often block our spinner.”