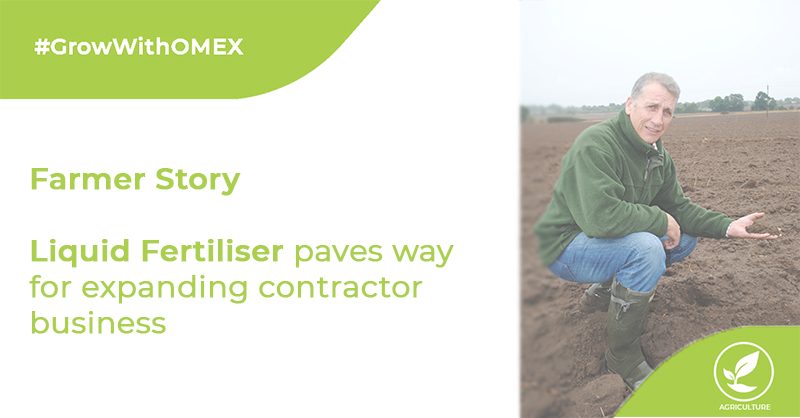 Applying liquid fertiliser plus Didin has significantly increased the overall spray days available for Mr Phillips by nearly a third, which has had a huge impact on his business profitability.

He only farms about 60ha of his own land now which supports continuous winter wheat and spring barley and takes about 10% of his time to manage. The contracting business accounts for 90% of the business turnover. Roots were dropped from his rotation due to the high capital investment and pressure on available man hours needed to invest in the contracting business. Stubble turnips break up the rotation on his spring barley land.

Milling wheat receives 225kg/ha N. It is a nutrient hungry crop, he says, which needs high nitrogen input to keep the protein levels up.

“Fifteen years ago we switched from granular fertiliser to liquids,” says Mr Phillips. “We changed because we wanted a simpler more accurate and environmentally acceptable system of applying essential nutrients to our land.”

“Granular application technology has moved on in the last 15 years but even now when you are driving on roads next to fields where a granular product has been applied there’s often white prills all over the road. This can’t be good for a farmers bank balance and certainly not for the environment.

“The first time we used OMEX liquid fertiliser we just used conventional mixtures and sometimes had some scorch, but it was the company’s Rob Burton who put us onto the slow release nitrogen product Didin, which stopped the problem and we have used ever since. It means only one application is needed to provide a crop’s entire nitrogen requirement, which was very appealing,” says Mr Phillips.

“The fact that we could also make that application in late February or early March took some getting our heads around at first, but we have never looked back since switching. I can appreciate why growers might be suspicious using slow release technology such as Didin, but it really is that simple.

“No more worries about timing issues, especially in a wet time, or the risk of causing compaction and ruts in the field. The beauty of Didin is that it is immobile in the soil so leaching risk is minimised. As soon as the weather warms up and crops start to grow, the nitrogen becomes readily available. Its impact on our farming system has been considerable. Our milling wheat yields average 3.5t/ac but we have achieved yields as high as 4.3t/ac. Soil testing shows that where yields have dropped it’s because of a phosphate deficiency.

“We have freed up a lot of time by adopting a nitrogen programme that involves just one application. It has made life so much easier without compromising quality or yield. Every year our wheat hits its milling premium. We also apply Protein Plus in the first week of July which helps us to achieve 13% protein,” he says.

Mr Phillips believes that the only reason growers would not use a slow release product in the nutrition programme is cost, but he argues that the extra cost of Didin is offset by the additional application costs required where a granular or liquid fertiliser is used on a split dose application system.

Although Mr Phillips only has a small arable enterprise, his primary focus is to his contractor clients and with less operations to worry about on the farm at key periods of the growing season, he can focus on looking after his clients and timely pesticide applications.

Currently the contracting business sprays up to 10,000ha of mainly pesticides and liquid nitrogen as far as Ripon to the south and Piercebridge to the north. Sprayer of choice is a 24m, 4000l Sands Vision 4. He would ideally like to increase sprayer capacity to 5500l, but a predominance of small fields and narrow lanes have proved restrictive.

Mr Phillips intends to apply OMEX suspension fertiliser for the first time this autumn to free up more time, improve application accuracy, and reduce storage and waste. His KRM 24m granular spreader is now redundant and will be sold or scrapped.

“Our soil indices are average, phosphate can be as low as 1.5 in some places but we get lots of highs and lows in the same field. Switching to OMEX suspension fertiliser should address the inconsistencies,” he says. “Applications will be tailored to each field rather than blanket-apply potash and phosphate across a field. The same applies to Didin which will be applied according to crop appraisal and forecast yields. Spring barley for example has a short growing season which means it requires nutrition from the moment it puts its roots down. We apply slow release nitrogen pre emergence to give the crop its best chance.

“On some of my customers wetter land, we always include Didin to reduce the number of in-season land movements, which has the potential to turn around the profitability on that land without compromising soil structure from compaction and rutting. It has been a game changer for some of these growers,” he says.

“Applying liquid fertiliser and Didin at 720 l/ha is a high volume but it’s just one application and when it’s done there’s no worries about timing. Didin works well in all cultivation systems including plough, disc and min till.

“Interest from my customers in liquid fertiliser is going up each year. Lack of storage, the need for manpower, tractors, trailers, telehandlers and dedicated applicators are all concerns when considering a granular fertiliser system. None of this is needed with a liquid system. OMEX will even install tanks to hold its nitrogen fertiliser and refill automatically during busy use periods.

“What’s there not to like about liquid fertiliser? You only need a sprayer which is usually already on the farm anyway, or a contractor,” says Mr Phillips.