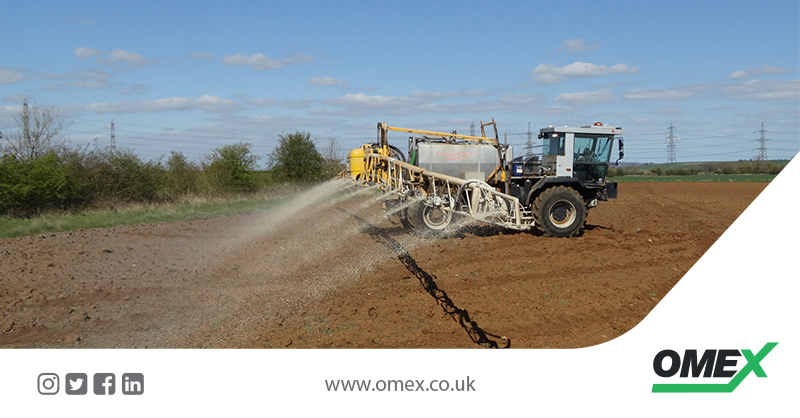 Suspension and solution fertiliser is now an integral part of a Cambridgeshire farming pre-pack potato and onion enterprise, where in the past under a granular fertiliser regime, issues of crop uniformity and quality plus management pressure at busy times of the year, was having a detrimental impact on performance.

Farming cousins Robert and Jonathan Brown, who run the family business E C Brown and Sons from Whittlesey, have experience of both granular and liquid fertiliser systems.

The business has been applying OMEX suspension fertiliser to 150ha of potatoes grown on owned and rented land for over four seasons, and for the first time this year to the 90ha of onions as well.

“On rented land our policy is to apply ‘maintenance plus whatever the crops needs’ so that we always leave the land in a better condition than we found it,” says Robert. “Good land is becoming a scarce resource so we want to be able to come back to the same farms at a later date.”

The Brown’s apply suspension fertiliser accurately at 36m, which Robert says is difficult  even with the best granular fertiliser. Being contractor applied also means that the business’s own resources can be utilised elsewhere more effectively.

“We use an Amazon fertiliser spreader which was fine up to 24m with compound fertiliser but the ballistics just aren’t consistent enough and it didn’t fit our 36 metre system,” he says.

“Matt Benstead is our approved OMEX contractor and he really seems to take pride in his work, which gives us the confidence to let him get on with the application without input from us. He also works well with OMEX district sales manager Ben Blom. Even when the pressure is on they keep everyone going with careful management and timings.”

The farm produces potatoes on contract for Produce World, Branston and Greenvale, mostly for the pre-pack market supplying the major supermarkets. Yields average around 44/50t/ha, which means the 5100t cold stores are always fully utilised. Onions are grown for the pre-pack market and marketed through South Eastern Produce Ltd.

“We irrigate as much land as we can, but with temperatures exceeding 30oC last year for extended periods of time meant we couldn’t keep up with the amount of water needed,” says Jonathan. “We start irrigating at tuber initiation and typically apply eight inches over the growing season.”

Water is extracted from a reservoir and rivers, but last year most of it came from the reservoir because the EA had to shut down extraction licences from rivers due to heavy demand and lack of flow in the rivers.

Following soil analysis of the potato land in the autumn, suspension fertiliser is applied to ploughed land in the spring and the mix includes 40% of the crops nitrogen requirement plus all the P:K and sulphur.

Potatoes are planted using a 3-row Standen cup planter. The Brown’s make the point that it is critical to get the correct spacing in the rows to ensure crop uniformity for the pre-pack market.

“Being on a 2.74m bed system for potatoes and onions and with 36m tramlines we can practise a controlled wheeling system, keeping compaction in the growing area to a minimum,” explains Robert.

“When we were applying P:K at 24m in granular form we ended up running in  the potato growing area. Application of the product was definitely less accurate, which manifested as uneven crops and affected crop uniformity and quality. We were having to grade out a higher percentage of green and misshaped potatoes in order to hit the quality pre-pack market.”

At planting the Brown’s also apply biostimulants and during the season some selected foliar feed sprays too.

An issue for Robert and Jonathan in the past with granular fertiliser was that it would arrive on farm in the spring at a time when staff and machinery were employed elsewhere. Having switched to a suspension system a major bonus is that all handling of the product is now done by the contractor.

“We don’t handle any base fertilisers for root crops ourselves anymore, in fact apart from the ordering it’s not even necessary for us to be involved with the delivery and application. We have no need to store that product now which frees up building space for other purposes.

“Applying base nutrition always used to be a two man operation whereas now it doesn’t involve any of our own employees.”

He adds that too much wind can also be a major challenge with applying granular products, compared to liquids that can still be applied accurately in moderate wind speeds. Management input has been significantly reduced.

Tackling the Brown’s on a cost comparison between the two fertiliser systems, they say there is not much between them, but a key point is that it frees up management time and labour at a busy time.

“I do think that it is very easy to underestimate the cost of a granular system,” says Jonathan. “It ties up machinery and labour which can now be utilised better elsewhere in the business, particularly the two telehandlers and their drivers as well as tractors and trailers needed to deliver bags to each field.”